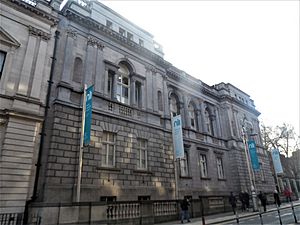 View on Kildare Street of the NLI

The National Library of Ireland (NLI; Irish: Leabharlann Náisiúnta na hÉireann) is the Republic of Ireland's national library located in Dublin, in a building designed by Thomas Newenham Deane. The Minister for Culture, Heritage and the Gaeltacht is the member of the Government of Ireland responsible for the library.

The mission of the National Library of Ireland is 'To collect, preserve, promote and make accessible the documentary and intellectual record of the life of Ireland and to contribute to the provision of access to the larger universe of recorded knowledge'

The library is a reference library and, as such, does not lend. It has a large quantity of Irish and Irish-related material which can be consulted without charge; this includes books, maps, manuscripts, music, newspapers, periodicals and photographs. Included in their collections is material issued by private as well as government publishers.

The Chief Herald of Ireland and National Photographic Archive are attached to the library. The library holds exhibitions and holds an archive of Irish newspapers. It is also the ISSN National Centre for Ireland. The library also provides a number of other services including genealogy.

The main library building is on Kildare Street, adjacent to Leinster House and the archaeology section of the National Museum of Ireland.

The National Library of Ireland was established by the Dublin Science and Art Museum Act 1877, which provided that the bulk of the collections in the possession of the Royal Dublin Society, should be vested in the then Department of Science and Art for the benefit of the public and of the Society, and for the purposes of the Act.

An Agreement of 1881 provided that the Library should operate under the superintendence of a Council of twelve Trustees, eight of whom were appointed by the Society and four by the Government; this Agreement also conferred on the Trustees the duty of appointing the officers of the Library. This arrangement remained in place until the library became an autonomous cultural institution in 2005.

The National Library of Ireland houses collections of archival papers, including personal notes and work books, of the following eminent writers:

The Library also holds the Cooper Collection. Austin Cooper (1759-1831) was a County Tipperary clerk who produce numerous sketches of Irish antiquities which were preserved by his great grandson. The Cooper Collection also contains drawings by other artists including Francis Wheatley.

The Library also maintains an online index of all Catholic parish registers up to the 1880’s which recorded baptisms, marriages and some burials. The original collection was preserved on microfilm and later was provided online. 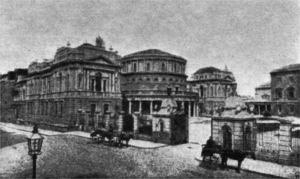 1907 photograph of the National Library of Ireland, as taken from the Nordisk familjebok

All content from Kiddle encyclopedia articles (including the article images and facts) can be freely used under Attribution-ShareAlike license, unless stated otherwise. Cite this article:
National Library of Ireland Facts for Kids. Kiddle Encyclopedia.