It features displays on prehistoric Ireland, including Bronze Age work in gold, early medieval church treasures of Celtic art, Viking Ireland and Medieval Ireland. There are special displays of items from Ancient Egypt, Cyprus and the Roman world, and special exhibitions are regularly mounted.

The Museum has a number of large permanent exhibits, mainly of Irish historical objects and also a few smaller exhibits on the ancient Mediterranean.

The prehistoric Ireland section contains artefacts from the earliest period of human habitation in Ireland (just after the Last Ice Age) up to the Celtic Iron Age. There are numerous stone implements created by the first hunter-gatherer colonists beginning around 7000 BC, then moving on to the tools, pottery and burial objects of the Neolithic farmers. Some notable artefacts include four rare Jadeite axeheads imported from the Alps of Neolithic Italy, and the unique ceremonial macehead discovered at the tomb of Knowth. The exhibit then covers the introduction of metallurgy into Ireland around 2500 BC, with early copper implements. From the later Bronze Age period there is an impressive array of bronze axes, daggers, swords, shields, cauldrons and cast bronze horns (the earliest known Irish musical instruments). There are a few very early Iron weapons. Wooden objects include a large dugout logboat, wooden wheels and cauldrons and ancient reed fishing equipment.

The central area of the museum contains one of the finest collections of Bronze Age gold objects in Europe. The goldwork ranges in date between 2200 BC and 500 BC, most of it probably being jewellery, but with many objects of unknown (possibly ritual) function. In the early Bronze Age most artefacts were made from sheet gold and include sundiscs and crescent shaped collars called lunulae. In the middle Bronze Age new gold working techniques were developed; starting around 1200 BC a great variety of torcs were produced from twisting bars of gold. Items from the late Bronze Age, starting in 900 BC, include solid gold bracelets and dress-fasteners as well as large sheet gold collars, ear-spools and a necklace of hollow golden balls.

See Gold working in the Bronze Age British Isles for more details on this topic. 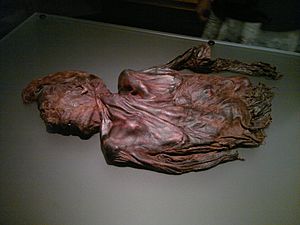 This new exhibit (opened in the 2000s) contains many of Ireland's bog bodies, as well as Celtic artefacts. The well-preserved bodies, which have been found in Irish bogs from the 19th century until the present day, are believed to have been ritualistically sacrificed. Eamonn Kelly (former Keeper of Irish Antiquities) developed the theory that the bog bodies were tribal kings, sacrificed by the community after having failed in their kingship and placed in pools of water at the boundary points of the tribal territory. Some seem to exhibit evidence of the so called threefold death practice.

The currently displayed bog bodies are:

The museum has an extensive research program to study the bog bodies with the latest scientific methods. Marie Cassidy, the then State Pathologist, aided in forensic examination of several of the recently discovered bodies.

Alongside the bodies are examples of the material culture of the period in which they lived (the Celtic Iron Age). These include metal weapons and horse trappings as well as wooden and leather pieces. The Petrie crown (named for George Petrie) is part of a high-status headdress made in the La Tène artistic style. The section also contains Ralaghan Man, a carved wooden figure believed to be a boundary marker and examples of bog butter, which is ancient butter preserved in the bog in containers such as wooden buckets. The museum also possesses several other bog bodies not currently displayed, such as the recently discovered Cashel Man (discovered 2011, dated to ~2000 BC), believed to be the oldest fleshed bog body found in Europe.

The Treasury exhibit includes such pieces as the Ardagh Chalice and the Tara Brooch, as well as the Broighter Gold, the Derrynaflan Hoard and the Cross of Cong, all famous examples of early medieval metalwork in Ireland.

The most recent permanent galleries to open are Viking Ireland and Medieval Ireland 1150-1550. There are also galleries on "Ancient Egypt", and "Ceramics and Glass from Ancient Cyprus".

Recent temporary exhibitions have included: "Roger Casement - voice of the voiceless", "Rites of Passage at Tara", "Clontarf 1014: Brian Boru and the Battle for Dublin", and "Life and Death in the Roman World".

Many of these pieces were found in the 19th century by peasants or agricultural labourers, when population expansion led to cultivation of land which had not been touched since the Middle Ages. Indeed, only the intervention of George Petrie of the Royal Irish Academy, and like-minded individuals from the Royal Society of Antiquaries of Ireland, prevented the metalwork from being melted down for the intrinsic value of its materials. Contemporary Irish are more tuned to their heritage, as can be seen in the example of the Irish Bog Psalter, which was discovered and reported by an alert machine operator in July 2006.

The Museums of both the above-mentioned institutions (the RIA and RSAI) formed the basis for the Archaeology and History section of the Museum at Kildare Street. This is the original site opened in 1890 as the Dublin Museum of Science and Art in the building designed by Thomas Newenham Deane and his son, Thomas Manly Deane. Until 1922, this site also included Leinster House, now the home of the Oireachtas.

All content from Kiddle encyclopedia articles (including the article images and facts) can be freely used under Attribution-ShareAlike license, unless stated otherwise. Cite this article:
National Museum of Ireland – Archaeology Facts for Kids. Kiddle Encyclopedia.