The National Museum of Ireland – Country Life is located in Turlough village, 8 km (5.0 mi) northeast of Castlebar, County Mayo, Ireland. Established in 2001, the museum is part of the National Museum of Ireland and is the only national museum outside Dublin. The museum exhibits the way of life of rural Irish people between 1850 and 1950, and is in the grounds of Turlough Park House. There are displays about the home, the natural environment, trades and crafts, communities, and working on the land and water.

The current Turlough House was designed by Thomas Newenham Deane, who also designed the Kildare Street branch of the National Museum of Ireland. It was built from 1863 to 1867, and was owned by the Fitzgerald family of Turlough.

In 1991, the house and 36 acres were purchased by the Mayo County Council. The house was renovated and an adjacent museum building was constructed in the slope of a hill above a pond. The Country Life Museum opened in September 2001. The upstairs of the original house is used as offices by the museum's small staff, and the downstairs is on show to the public. 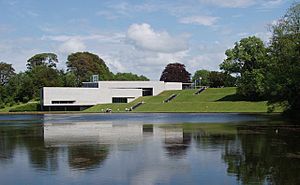 The original gardens of Turlough House are now maintained by the Office of Public Works and the local authority, Mayo County Council. They include a vinery, a special type of greenhouse for grapevines and other fruiting plants, a number of walks, terraces and a sunken garden, the ruins of the original house (occupied 1722-1786) and a section of the Castlebar River, with an artificial lake with islands, and a round tower.

The National Folklife collection is extensive, and only part of it is at Turlough Park, some parts being in storage in Daingean, for example.

The museum has both permanent and temporary exhibitions, arranged on a thematic basis over four floors.

Some features have included:

The museum has its own parking, a shop and a café. The museum opens Sunday and Monday, 1pm - 5pm and Tuesday to Saturday, 10am - 5pm.

The National Museum of Ireland as a whole, which includes the Museum of Country Life, underwent a decrease in funding from €19m in 2008 to less than €12m in 2014. Although there were tentative plans to close some of the museum branches or initiate an entrance fee, as of 2018, these plans have not gone into effect.

All content from Kiddle encyclopedia articles (including the article images and facts) can be freely used under Attribution-ShareAlike license, unless stated otherwise. Cite this article:
National Museum of Ireland – Country Life Facts for Kids. Kiddle Encyclopedia.