The National Museum of Ireland (Irish: Ard-Mhúsaem na hÉireann) is Ireland's leading museum institution, with a strong emphasis on national and some international archaeology, Irish history, Irish art, culture, and natural history. It has three branches in Dublin, the archaeology and natural history museums adjacent on Kildare Street and Merrion Square, and a newer Decorative Arts and History branch at the former Collins Barracks, and the Country Life museum in County Mayo.

See also Category:Collection of the National Museum of Ireland 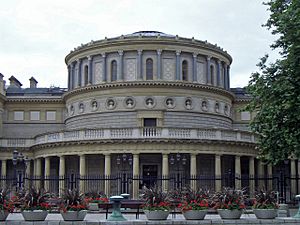 The National Museum of Ireland – Archaeology on Kildare Street has displays on prehistoric Ireland, including early work in gold, church treasures and objects from the Viking and medieval periods. The Kingship and Sacrifice exhibition includes well preserved bog bodies and Ralaghan Man. There are special displays of items from Egypt, Cyprus and the Roman world, and special exhibitions are regularly mounted.

This section includes famous examples of early medieval Celtic metalwork in Ireland such as the Ardagh Chalice, the Tara Brooch, and the Derrynaflan Hoard. Prehistoric pieces include the Iron Age Broighter Gold and over 50 gold lunulas (not all on display), and other Bronze Age jewellery. Many of these pieces were found in the 19th century by poor people or agricultural labourers, when population expansion led to cultivation of land which had not been touched since the Middle Ages. Indeed, without the intervention of George Petrie of the Royal Irish Academy and like-minded individuals from the Royal Society of Antiquaries of Ireland, most of the metalwork would have been melted down for the intrinsic value of its materials, as did frequently happen despite their efforts. Contemporary Irish are more tuned to their heritage, as can be seen in the example of the Irish Bog Psalter, which was discovered and reported by an alert machine operator in July 2006.

The Museums of both the above-mentioned institutions formed the basis for the Archaeology and History section of the Museum at Kildare Street. This is the original site opened in 1890 as the Dublin Museum of Science and Art in the building designed by Thomas Newenham Deane and his son, Thomas Manly Deane. Until 1922, this site also included Leinster House, now the home of the Oireachtas.

National Museum of Ireland – Decorative Arts and History, including the Great Seal of the Irish Free State, is the part of the collection kept at the Collins Barracks site, a former military barracks named after Michael Collins in 1922. This site, opened in 1997, also holds the Museum's administrative centre, a shop and a coffee shop.

This section has displays of furniture, silver, ceramics and glassware, as well as examples of folk life and costume, and money and weapons. A Chinese porcelain vase from about 1300 AD, the Fonthill vase, is one of the features. Special exhibitions are mounted regularly; in summer 2007, for example, replicas of six Irish High Crosses that were subsequently shown internationally. 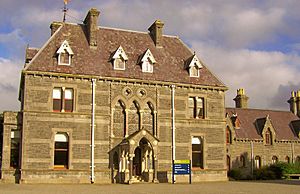 Country Life is the most recent part of the museum to be opened. It is located just outside Turlough Village, on the N5 eight kilometres east of Castlebar, in County Mayo, and was opened in 2001.

The museum is focused on ordinary life from the mid-19th century to the mid-20th century, with much of the material coming from rural Ireland in the 1930s. There are displays on the home, the natural environment, communities and forces for change.

The Natural History Museum, which is part of the National Museum, although often thought of as distinct, is on Merrion Street in Dublin and houses specimens of animals from around the world. Its collection and Victorian appearance have not changed significantly since the early 20th century.

All content from Kiddle encyclopedia articles (including the article images and facts) can be freely used under Attribution-ShareAlike license, unless stated otherwise. Cite this article:
National Museum of Ireland Facts for Kids. Kiddle Encyclopedia.