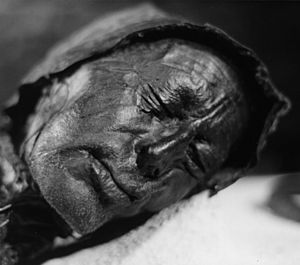 Tollund Man lived in the 4th century BCE, and is one of the best studied examples of a bog body.

A bog body is a human body that has been naturally mummified in a peat bog. Such bodies, sometimes known as bog people, are both geographically and chronologically widespread, having been dated to between BC/BCE and the Second World War. The unifying factor of the bog bodies is that they have been found in peat and are partially preserved; however, the actual levels of preservation vary widely from perfectly preserved to mere skeletons.

Unlike most ancient human remains, bog bodies often retain their skin and internal organs due to the unusual conditions of the surrounding area. Combined together, highly acidic water, low temperature, and a lack of oxygen preserve but severely tan their skin. While the skin is well-preserved, the bones are generally not. The acidic conditions of these bogs allows for the preservation of materials such as skin, hair, nails, wool, and leather.

The oldest known bog body is the skeleton of Koelbjerg Man from Denmark, who has been dated to 8000 BCE, during the Mesolithic period. The oldest fleshed bog body is that of Cashel Man, who dates to 2000 BCE during the Bronze Age. The overwhelming majority of bog bodies – including examples such as Tollund Man, Grauballe Man and Lindow Man – date to the Iron Age and have been found in northwest European lands, particularly Denmark, Germany, the Netherlands, the UK, Sweden, Poland, and Ireland. Such Iron Age bog bodies typically illustrate a number of similarities, such as violent deaths and a lack of clothing, which has led archaeologists to believe that they were killed and deposited in the bogs as a part of a widespread cultural tradition of human sacrifice or the execution of criminals. Bogs could have indeed been seen as liminal places positively connected to another world, which might welcome contaminating items otherwise dangerous to the living. More recent theories postulate that bog people were perceived as social outcasts or "witches", as legal hostages killed in anger over broken treaty arrangements, or as victims of an unusual death eventually buried in bogs according to traditional customs.

The number of bog body finds is around 122. The newest bog bodies are those of soldiers killed in the wetlands of the Soviet Union during the Second World War.

Hundreds of bog bodies have been recovered and studied. The bodies have been most commonly found in the Northern European countries of Denmark, Germany, the Netherlands, the United Kingdom, and Ireland. In 1965, the German scientist Alfred Dieck catalogued more than 1,850 bog bodies, but later scholarship revealed much of the Dieck's work was erroneous, and an exact number of discovered bodies is unknown.

Several bog bodies are notable for the high quality of their preservation and the substantial research by archaeologists and forensic scientists. These include:

All content from Kiddle encyclopedia articles (including the article images and facts) can be freely used under Attribution-ShareAlike license, unless stated otherwise. Cite this article:
Bog body Facts for Kids. Kiddle Encyclopedia.