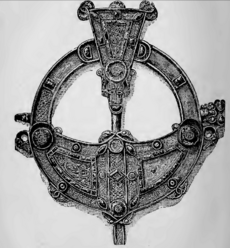 Drawing of the head of the Tara Brooch

The Tara Brooch is a Celtic brooch of the pseudo-penannular type, made in 710 to 750 AD. It was found in Ireland in 1850, but, despite its name, not at Tara but likely near Bettystown on the coast of County Meath. The name by which the brooch became known was attached to it by the jeweller who purchased it, as a marketing ploy for the copies they made. The brooch was exhibited internationally and was one of the artifacts that fuelled the Celtic Revival in the mid-19th century. It is now on display in the National Museum of Ireland in Dublin.

The National Museum of Ireland describes it as follows: "...[T]he Tara Brooch can be considered to represent the pinnacle of early medieval Irish metalworkers’ achievement. Each individual element of decoration is executed perfectly and the range of technique represented on such a small object is astounding."

The brooch has a diameter of 8.7 cm and the pin has a length of 32 cm. It is made of cast and gilt silver, decorated on both front and rear. On the front are fine gold filigree panels depicting animal and abstract motifs, separated by studs of glass, enamel and amber. The back is flatter than the front, and the decoration is cast. The motifs consist of scrolls and triple spirals. Attached to the brooch by a swivel attachment is a silver chain made from plaited wire. The swivel consists of animal heads framing two small cast glass human heads.

Although the brooch is named after the Hill of Tara, traditionally seen as the seat of the High Kings of Ireland, the Tara Brooch has no connection to either the Hill of Tara or the High Kings of Ireland. The brooch was supposedly found in August 1850 on the beach at Bettystown, near Laytown, in County Meath, not far from Drogheda and some 50 km (30 mi) north of Dublin and about 25 kilometers from Tara. The finder, a peasant woman (or her two sons), claimed to have found it in a box buried in the sand, though it is likely that it was found inland, and she claimed it was found at the beach to avoid a legal claim by the landowner. It was sold to a dealer and then to the Dublin jeweller, G. & S. Waterhouse, who were already producing Celtic Revival jewellery and who renamed it the "Tara Brooch" to increase its public appeal.

The brooch was made in many pieces, with much of the decoration on small "trays" or panels which were then fixed into place. When it was found, only one panel of decoration was missing, but several more have since disappeared, apparently before it entered the collection of the Royal Irish Academy, who later transferred their collection of antiquities to the new National Museum.

All content from Kiddle encyclopedia articles (including the article images and facts) can be freely used under Attribution-ShareAlike license, unless stated otherwise. Cite this article:
Tara Brooch Facts for Kids. Kiddle Encyclopedia.