Hill of Tara facts for kids

Kids Encyclopedia Facts
Not to be confused with Tara Hill, County Wexford.

The Hill of Tara (Irish: Cnoc na Teamhrach, Teamhair or Teamhair na Rí), located near the River Boyne, is an archaeological complex that runs between Navan and Dunshaughlin in County Meath, Ireland. It contains a number of ancient monuments and, according to tradition, was the seat of the High King of Ireland. 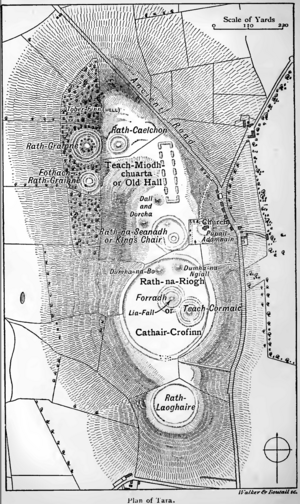 Layout of the Hill of Tara

At the summit of the hill, to the north of the ridge, is an oval Iron Age hilltop enclosure, measuring 318 metres (1,043 ft) north-south by 264 metres (866 ft) east-west and enclosed by an internal ditch and external bank, known as Ráith na Ríogh (the Fort of the Kings, also known as the Royal Enclosure). The most prominent earthworks within are the two linked enclosures, a bivallate (double-ditched) ring fort and a bivallate ring barrow known as Teach Chormaic (Cormac's House) and the Forradh or Royal Seat. In the middle of the Forradh is a standing stone, which is believed to be the Lia Fáil (Stone of Destiny) at which the High Kings were crowned. According to legend, the stone would scream if a series of challenges were met by the would-be king. At his touch the stone would let out a screech that could be heard all over Ireland. To the north of the ring-forts is a small Neolithic passage tomb known as Dumha na nGiall (the Mound of the Hostages), which was constructed around 3,400 (cal.) BC.

To the north, just outside the bounds of the Ráith na Rí, is a ringfort with three banks known as Ráith na Seanadh (the Rath of the Synods). Excavations of this monument have produced Roman artefacts dating from the 1st–3rd centuries.

Farther north is a long, narrow rectangular feature known as the Banqueting Hall (Teach Miodhchuarta), although it is more likely to have been a ceremonial avenue or cursus monument approaching the site, and three circular earthworks known as the Sloping Trenches and Gráinne's Fort. All three are large ring barrows which may have been built too close to the steep declivity and subsequently slipped. 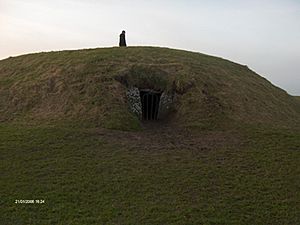 The "Mound of the Hostages"

To the south of the Royal Enclosure lies a ring-fort known as Ráith Laoghaire (Laoghaire's Fort), where the eponymous king is said to have been buried in an upright position. Half a mile south of the Hill of Tara is another hill fort known as Rath Maeve, the fort of either the legendary queen Medb, who is more usually associated with Connacht, or the less well known legendary figure of Medb Lethderg, who is associated with Tara.

A church, called Saint Patrick's, is on the eastern side of the hilltop. The 'Rath of the Synods' has been partly destroyed by its churchyard. The modern church was built in 1822–23 on the site of an earlier one. The earliest evidence of a church at Tara is a charter dating from the 1190s. In 1212, this church was "among the possessions confirmed to the Knights Hospitallers of Saint John of Kilmainham by Pope Innocent III". A 1791 illustration shows the church building internally divided into a nave and chancel, with a bell-tower over the western end. A stump of wall marks the site of the old church today, but some of its stonework was re-used in the current church. The building is now used as a visitor centre. 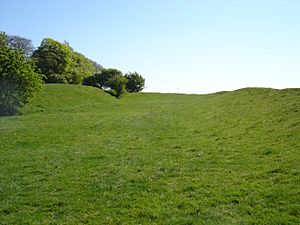 The Hill of Tara is documented in the 11th-century text The Book of Invasions as the seat of the high-kings of Ireland from the times of the mythological Fir Bolg and Tuatha Dé Danann to the text's composition. However, there is no evidence that the institution of High-kingship of Ireland conferred authority over the whole island on its possessor.

The central part of the site could not have housed a large permanent retinue, implying that it was instead used for occasional meetings. There were no large defensive structures. Earliest extant written records show that high kings were inaugurated there, and the "Seanchas Mor" legal text (written some time after 600AD) specified that the king must drink ale and symbolically marry the goddess Maeve (Medb) in order to qualify for high kingship.

Previous scholarly disputes over Tara's initial importance increased when 20th-century archaeologists identified pre-Iron Age monuments and human-built habitable forms from the Neolithic period (roughly 5,000 years ago). One of these forms, the Mound of the Hostages, has a short passage aligned with sunrise on the solar cross-quarter days coinciding with ancient annual festivals celebrated on the midpoints between vernal and autumnal equinox ("Imbolc" honoring preparations for planting time or 'pre-spring' on about the 4th of February) and summer and winter solstice ("Samhain" honoring harvest time or 'first of winter' on about the 8th of November). The mound's passage is shorter than the long entryways of monuments like Newgrange, which makes it less precise in providing alignments with the Sun. Martin Brennan , in The Stones of Time, states that the daily changes in the position of a 13-foot (4-m) long sunbeam are more than adequate to determine specific dates.

A theory that may predate the Hill of Tara's splendor before Milesian times is the legendary story naming the Hill of Tara as the capital of the Tuatha Dé Danann, the pre-Milesians dwellers of Ireland. When the Milesians established a seat in the hill, the hill became the place from which the kings of Mide ruled Ireland. There is much debate among historians as to how far the King's influence spread; it may have been as little as the middle of Ireland, or may have been all the northern half. The high kingship of the whole island was only established to an effective degree by Máel Sechnaill mac Máele Ruanaid (Malachy I). Irish pseudohistorians of the Middle Ages made it stretch back into prehistoric times. Atop the hill stands a stone pillar that was the Irish Lia Fáil (Stone of Destiny) on which the High Kings of Ireland were crowned; legends suggest that the stone was required to roar three times if the chosen one was a true king (compare with the Scottish Lia Fail). Both the Hill of Tara as a hill and as a capital seems to have political and religious influence, which diminished since St. Patrick's time.

During the rebellion of 1798, United Irishmen formed a camp on the hill but were attacked and defeated by British troops on 26 May 1798 and the Lia Fáil was moved to mark the graves of the 400 rebels who died on the hill that day. In 1843, the Irish Member of Parliament Daniel O'Connell hosted a peaceful political demonstration on Hill of Tara in favour of repeal of the Act of Union which drew over 750,000 people, which indicates the enduring importance of the Hill of Tara.

During the turn of the 20th century the Hill of Tara was vandalized by British Israelists who thought that the Irish were part of the Lost Tribes of Israel and that the hill contained the Ark of the Covenant. 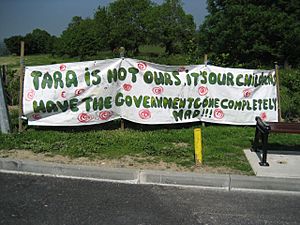 A banner protesting against the proposed motorway, 2007

The M3 motorway, owned by Siac Construction and Cintra, S.A., which opened in June 2010, passes through the Tara-Skryne Valley – as does the existing N3 road. Protesters argue that since the Tara Discovery Programme started in 1992, there is an appreciation that the Hill of Tara is just the central complex of a wider landscape. The distance between the motorway and the exact site of the Hill is 2.2 km (1.4 mi) – it intersects the old N3 at the Blundelstown interchange between the Hill of Tara and the Hill of Skyrne. The presence of this interchange situated in the valley has led to allegations that further development of an energy generator is planned near Tara. An alternative route approximately 6 km (3.7 mi) west of the Hill of Tara is claimed to be a straighter, cheaper and less destructive alternative. On Sunday 23 September 2007 over 1500 people met on the Hill of Tara to take part in a human sculpture representing a harp and spelling out the words "SAVE TARA VALLEY" as a call for the rerouting of the M3 motorway away from Tara valley. Actors Stuart Townsend and Jonathan Rhys Meyers attended this event.

The Hill of Tara was included in the World Monuments Fund's 2008 Watch List of the 100 Most Endangered Sites in the world. It was included, in 2009, in the 15 must-see endangered cultural treasures in the world by the Smithsonian Institution.

There is currently a letter writing campaign being undertaken to preserve the Hill of Tara.

All content from Kiddle encyclopedia articles (including the article images and facts) can be freely used under Attribution-ShareAlike license, unless stated otherwise. Cite this article:
Hill of Tara Facts for Kids. Kiddle Encyclopedia.