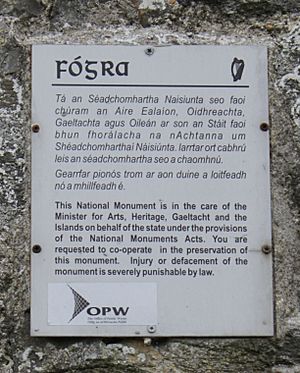 A typical notice (Irish: fógra) at a National Monument. (Note that the current minister responsible is the Minister for Housing, Local Government and Heritage)

A national monument (Irish: séadchomhartha náisiúnta) in the Republic of Ireland is a structure or site, the preservation of which has been deemed to be of national importance and therefore worthy of state protection. If the land adjoining the monument is essential to protect it, this land may also be protected.

Equivalent monuments in Northern Ireland are termed scheduled monuments and come under the protection of the Department for Communities.

Monuments had been protected under the Ancient Monuments Protection Act 1882, an Act of the Parliament of the United Kingdom of Great Britain and Ireland. After the establishment of the Irish Free State in 1922, this framework was reformed by the National Monuments Act 1930. The list of national monuments has since been expanded. By 2010 there were nearly 1000 monuments in state ownership or guardianship, although this represents only a small proportion of Ireland's recorded archaeological heritage. There are more than 126,000 known sites ['Recorded Monuments'] in Ireland. Each national monument is numbered (for example, the Rock of Cashel is National Monument number 128, Newgrange is number 147), and a numbered monument may represent a group of sites, as is the case at the Rock of Cashel.

A provision of the National Monuments (Amendment) Act 2004 allows for the destruction in whole or in part of a national monument by the Government of Ireland if such destruction is deemed to be in the "public interest". According to press reports, these provisions were included to facilitate road schemes, and in particular the destruction of Carrickmines Castle, a national monument, to build an intersection along the south-eastern section of the M50 motorway.

Main page: List of World Heritage Sites in the Republic of Ireland

The following is an index to lists of National Monuments of the Republic of Ireland, divided by province.

All content from Kiddle encyclopedia articles (including the article images and facts) can be freely used under Attribution-ShareAlike license, unless stated otherwise. Cite this article:
National monument (Ireland) Facts for Kids. Kiddle Encyclopedia.