Collins Barracks (Irish: Dún Uí Choileáin) is a former military barracks in the Arbour Hill area of Dublin, Ireland. The buildings are now the National Museum of Ireland – Decorative Arts and History. Housing both British armed forces, and Irish army garrisons through three centuries, the barracks were the oldest continuously occupied example in the world.

Originally called simply The Barracks, and later The Royal Barracks, the name was changed to Collins Barracks when handed over to the Irish Free State in 1922.

Built in 1702, and further extended in the late 18th century and 19th century, the complex's main buildings are neo-classical in style. Since 1997 the barracks have been home to collections of the National Museum of Ireland (for Decorative Arts and History exhibits), and the original structures have seen some award winning redevelopment and conservation work to support this new role.

The museum faces the Luas tram "red line" (Museum stop), a Memorial Garden at Croppies Acre marking the 1798 rebellion, and the River Liffey.

Save for the Royal Hospital Kilmainham, the barracks is the earliest public building in Dublin, and was built from 1701 by the then Surveyor General under Queen Anne, Thomas de Burgh. (Burgh was also the architect of the famous library building at Trinity College, Dublin.)

Built on a site originally intended for a mansion of the Duke of Ormonde, the complex has several large squares, each open on the south side. The largest square(Clarke's Square) has arcaded colonnades on the east and west sides, and the main buildings are faced with granite.

The oldest inhabited barracks in Europe (and once one of largest), it was originally known simply as the Barracks and later the Royal Barracks, and a mainstay of British forces on the island for several hundred years.

Theobald Wolfe Tone, one of the main leaders of the 1798 rebellion was held prisoner, court-martialled and convicted of treason at the Barracks.

Through the 19th century, up to 1,500 troops of various Regiments of Foot (and up to two troops of horse) were stationed at the barracks. However, by the 1880s conditions of accommodation were dangerously inadequate, and strongly criticised following an investigation by Commissioners of the War Office as levels of disease increased. This included outbreaks of enteric fever which claimed the lives of a number of men, from amongst which were members of the 8th King's Royal Irish Hussars – predecessor to the current regiment: The Queen's Royal Hussars.

During the 1916 Easter Rising, the 10th Battalion of the Royal Dublin Fusiliers and other forces were deployed from the Royal Barracks to fight the insurgent Irish Citizen Army and Irish Volunteers who occupied strongly held positions close by on Usher's Island (under Sean Heuston), the Four Courts (under Ned Daly), and the GPO (under Pádraig Pearse). 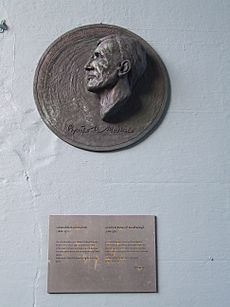 Under the Anglo-Irish Treaty (which marked the end of the Irish War of Independence), the complex was handed over to troops of the Irish Free State in December 1922.

It was almost immediately named Collins Barracks after Michael Collins, the first commander-in-chief of the Free State, who had been killed that year. The barracks housed forces of the Free State Army through the Irish Civil War and for 70 years was home to units of the Eastern Command of the Irish Defence Forces. The 5th Infantry Battalion marched out of the barracks for the last time in 1997, and made way for the National Museum of Ireland.

1997 to present – National Museum of Ireland

Entrance to the National Museum of Ireland, Collins Barracks.

As part of de-militarisation, the barracks underwent considerable redevelopment – including the conversion and linking of two sides of Clarke Square with glass faced structures. This work was awarded the country's premier award for architectural conservation, the Silver Medal for Conservation, by Royal Institute of the Architects of Ireland (RIAI).

Home to the Decorative Arts and History section of the National Museum, the museum also has galleries dedicated to exhibits on military history.

However, the main focus of the galleries is on arts, craft and wares, including exhibits on: Irish coins and currency, silverware, furniture, folklife and costumes, ceramics, glassware, etc. Included are artefacts such as Etruscan vases, gauntlets worn by King William at Battle of the Boyne, a life belt and oar salvaged from the wreck of the RMS Lusitania and a pocket book carried by Wolfe Tone whilst imprisoned in the Barracks. (See above).

All content from Kiddle encyclopedia articles (including the article images and facts) can be freely used under Attribution-ShareAlike license, unless stated otherwise. Cite this article:
Collins Barracks, Dublin Facts for Kids. Kiddle Encyclopedia.