Callan (Irish: Callainn) is a market town in County Kilkenny in Ireland. Situated 16 km (10 mi) south of Kilkenny on the N76 road to Clonmel, it is near the border between County Tipperary. It is the largest town in the county, with a recorded population of 2,330 (census 2011). 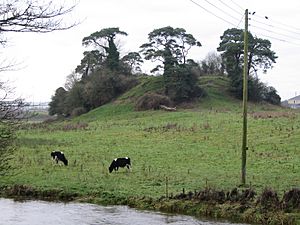 "The Moat" situated in Callan

Callan was founded by William the Marshal in 1207 and reputedly gets its name from the High King of Ireland, Niall Caille. It is reported that while at war with the Norsemen the High King arrived in Callan to find that its river was in flood. The King witnessed his servant trying to cross the river and being swept away by the fast flowing current.

The King, recorded in history as a man of action, seeing the impending disaster, impetuously urged his horse into the fast flowing river in a vain bid to save his servant, only to be also overcome and drowned by the torrent. The river in question is now named the "Kings River". 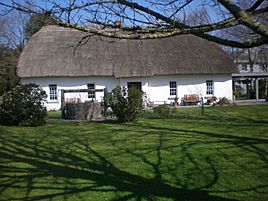 Callan is the birthplace of some famous people, namely:

Neil Jordan's film Breakfast on Pluto with Cillian Murphy and Liam Neeson was filmed in Callan during August–September 2005. During the two weeks of filming in Callan, the main streets of the town were transformed for use in the film.

In 2007, Callan celebrated its 800th year. President Mary McAleese launched the 800th celebrations of the town being granted a charter.

On April 19, 2013, the discount superstore Aldi opened its 100th Irish store in Callan.

In order to commemorate those who died in the Callan area during world war one, a statue was erected outside the church of the assumption on green street. A ceremony was held in order to pray for those who fought in the war and also for the families of those who died during the great war. 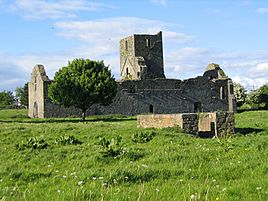 All content from Kiddle encyclopedia articles (including the article images and facts) can be freely used under Attribution-ShareAlike license, unless stated otherwise. Cite this article:
Callan, County Kilkenny Facts for Kids. Kiddle Encyclopedia.