Sir Charles Edward Kingsford Smith MC, AFC (9 February 1897 – 8 November 1935), often called by his nickname Smithy, was an early Australian aviator. In 1928, he earned global fame when he made the first trans-Pacific flight from the United States to Australia. He also made the first non-stop crossing of the Australian mainland, the first flights between Australia and New Zealand, and the first eastward Pacific crossing from Australia to the United States. He also made a flight from Australia to London, setting a new record of 10.5 days.

Smith was born on February 9, 1897, in Hamilton, Brisbane (the capital city of Queensland, a state in Australia). He went to school at St. Andrew’s Cathedral Choir School and Sydney Technical High School. When he turned 16, Smith became an apprentice at Colonial Sugar Refining Co. Ltd., where he got training in engineering.

In 1915, Smith joined the 1st Australian Imperial Force (AIF), the main branch of the Australian Army that fought outside of Australia in World War I. In the AIF he was a sapper (someone who builds and repairs roads and bridges) and a motorcycle dispatch rider (someone who delivers important messages). In 1916 he transferred to the Royal Flying Corps (RFC), where he became a pilot and a second lieutenant.

In 1917, Smith's plane was shot down during battle. He survived, but was injured and had to have part of his left foot amputated (removed by surgery). He received the Military Cross for his bravery in battle. Because of his injuries, Smith was made an RFC flying teacher.  He was also promoted to Captain.  In April of 1918, Smith was assigned to the Royal Air Force, which had just been created.

After finishing his military service in 1919, Smith created Kingsford Smith, Maddocks Aeros Ltd., flying a joy-riding service (which sold plane rides to customers for entertainment). He flew mostly in the North of England.  Later, he worked in the United States as a barnstormer, entertaining people by doing tricks in his airplane.  In 1921, he returned to Australia.  There he kept working as a barnstormer and also flew airmail services (he delivered mail by airplane).

On June 2, 1921, Smith applied for a commercial pilot’s license.  He became one of Australia’s first airline pilots after he was hired to fly for the newly created West Australian Airways. 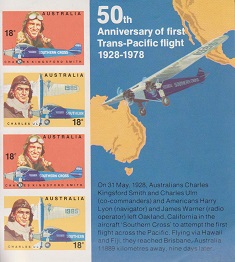 Stamp sheet, released in Australia in 1978 in commemoration of the 50th anniversary of the first Trans-Pacific flight

Smith became famous for setting flying records. He was very famous for all of his flights around the world. His famous flights included:

The same year as his 10,000-mile flight, Smith married Mary Powell. Together they had a son called Charles.

Sir Charles Kingsford Smith and co-pilot John Thompson "Tommy" Pethybridge were flying the Lady Southern Cross overnight from Allahabad, India, to Singapore, as part of their attempt to break the England-Australia speed record held by C. W. A. Scott and Tom Campbell Black, when they disappeared over the Andaman Sea in the early hours of 8 November 1935. Despite a brave search for 74 hours over Bay of Bengal by test pilot Eric Stanley Greenwood OBE their bodies were never recovered.

Eighteen months later, Burmese fishermen found an undercarriage leg and wheel (with its tyre still inflated) which had been washed ashore at Aye Island in the Gulf of Martaban, 3 km (2 mi) off the southeast coastline of Burma, some 137 km (85 mi) south of Mottama (formerly known as Martaban). Lockheed confirmed the undercarriage leg to be from the Lady Southern Cross. Botanists who examined the weeds clinging to the undercarriage leg estimated that the aircraft itself lies not far from the island at a depth of approximately 15 fathoms (90 ft; 27 m). The undercarriage leg is now on public display at the Powerhouse Museum in Sydney, Australia.

In 2009, filmmaker and explorer Damien Lay stated he was certain he had found the Lady Southern Cross. The location of the claimed find was widely misreported as "in the Bay of Bengal". However, the 2009 search was in fact at the same location where the landing gear had been found in 1937, at Aye Island in the Andaman Sea.

Kingsford Smith was survived by his wife, Mary Kingsford Smith, and their three-year-old son Charles Jnr. Kingsford Smith's autobiography, My Flying Life, was published posthumously in 1937 and became a best seller.

Kingsford Smith was knighted in the 1932 King's Birthday Honours List as a Knight Bachelor. He received the accolade on 3 June 1932 from the Australian Governor-General Sir Isaac Isaacs for services to aviation and later was appointed honorary Air Commodore of the Royal Australian Air Force. 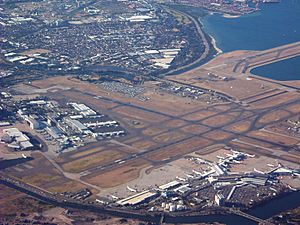 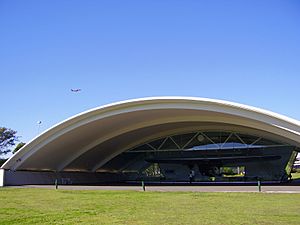 His most famous aircraft, the Southern Cross, is now preserved and displayed in a purpose-built memorial to Sir Charles Kingsford Smith near the International Terminal at Brisbane Airport. Kingsford Smith sold the plane to the Australian Government in 1935 for £3000 so it could be put on permanent display for the public. The plane was carefully stored for many years before the current memorial was built.

Opened in 2009, Kingsford Smith School in the Canberra suburb of Holt was named after the famous aviator, as was Sir Charles Kingsford-Smith Elementary School in Vancouver, British Columbia, Canada.

He was pictured on the Australian $20 paper note (in circulation from 1966 until 1994, when the $20 polymer note was introduced to replace it), to honour his contribution to aviation and his accomplishments during his life. He was also depicted on the Australian one-dollar coin of 1997, the centenary of his birth.

Albert Park in Suva, where he landed on the trans-Pacific flight, now contains the Kingsford Smith Pavilion.

Qantas named its sixth Airbus A380 (VH-OQF) after Kingsford Smith.

KLM named one of its Boeing 747s (PH-BUM) after Kingsford Smith.

A satellite of Saturn, Kingsford Smith is named after him.

All content from Kiddle encyclopedia articles (including the article images and facts) can be freely used under Attribution-ShareAlike license, unless stated otherwise. Cite this article:
Charles Kingsford Smith Facts for Kids. Kiddle Encyclopedia.