Suva is the capital and largest metropolitan city in Fiji. It is located on the southeast coast of the island of Viti Levu, in the Rewa Province, Central Division.

In 1877, it was decided to make Suva the capital of Fiji, as the geography of former main European settlement at Levuka on the island of Ovalau, Lomaiviti province proved too restrictive. The administration of the colony was moved from Levuka to Suva in 1882.

At the 2007 census, the city of Suva had a population of 85,691. Including independent suburbs, the population of the Greater Suva urban area was 172,399 at the 2007 census. Suva, along with the bordering towns of Lami, Nasinu, and Nausori, have a total urban population of around 330,000, over a third of the nation's population. This urban complex (not including Lami) is known also as the Suva-Nausori corridor.

Suva is the political, economic, and cultural centre of Fiji. It is also the economic and cultural capital of the South Pacific, hosting the majority of regional headquarters of major corporations, as well as international agencies and diplomatic missions in the region. The city also has a thriving arts and performance scene, with a growing reputation as the region's fashion capital. 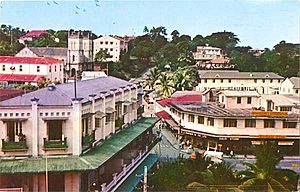 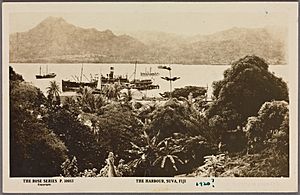 In return for a promise to pay off debts owed to the United States by the Bauan chieftain, Seru Epenisa Cakobau, the Australian-based Polynesia Company was granted 5,000 km2 (1,900 sq mi) of land, 575 km2 (222 sq mi) of it near what was then the village of Suva, in 1868. The original intention was to develop a cotton farming industry, but the land and climate proved unsuitable.

Following the cession of the Fiji Islands to the United Kingdom in 1874, the colonial authorities decided to move the capital to Suva from Levuka, Ovalau, Lomaiviti in 1877, as Levuka's location, between a steep mountain and the sea, made any expansion of the town impractical. The transfer was made official in 1882. Colonel F.E. Pratt of the Royal Engineers was appointed Surveyor-General in 1875 and designed the new capital, assisted by W. Stephens and Colonel R.W. Stewart.

Following the promulgation of the Municipal Constitution Ordinance of 1909, Suva acquired municipal status in 1910. The town initially comprised one square mile; these boundaries remained intact until 1952 when the Muanikau and Samabula wards were annexed, expanding its territory to 13 km2 (5.0 sq mi). In October that year, Suva was proclaimed a city – Fiji's first. Tamavua was subsequently annexed; the most recent extension of the city boundaries has been to incorporate the Cunningham area to the north of the city. Urban sprawl has resulted in a number of suburbs that remain outside of the city limits; together with the city itself, they form a metropolitan area known as the Greater Suva Area.

The city hosted the 2003 South Pacific Games, being the third time in the event's 40-year history that they had been held in Suva. As part of the hosting of the event, a new gymnasium and indoor sports centre, swimming pool, and stadium; field hockey pitch; and stands were built in the area around Suva, funded by the government and a $16 million People's Republic of China aid package. 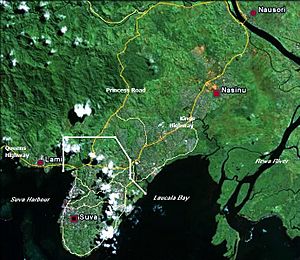 Suva is the capital of Fiji and is a harbour city built on a peninsula reaching out into the sea. It has a mix of modern buildings and traditional colonial architecture.

The city is perched on a hilly peninsula between Laucala Bay and Suva Harbour in the southeast corner of Viti Levu. The mountains north and west catch the southeast trade winds, producing moist conditions year round.

Suva is the commercial and political centre of Fiji, though not necessarily the cultural centre. It is Fiji's main port city.

Although Suva is on a peninsula, and almost surrounded by sea, the nearest beach is 40 kilometres (25 mi) away at Pacific Harbour and the nearby coast is lined by mangroves. A significant part of the city centre, including the old Parliament buildings, is built on reclaimed mangrove swamp.

The Central Business District encompasses an area known as the Central Ward; one of Suva's six wards, Central occupies close to the whole south-western side of the Suva Peninsula.

The city's six wards beginning from the city centre, then north, then clockwise rotation.

Suva sits in the middle of an urban conurbation that stretches from Lami, to the immediate west of the city, along the Queens Highway and Nasinu town, on its eastern border all the way to the Rewa River, along the Kings Highway. This conurbation, sometimes known as the Suva Urban Complex, continues till Nausori, over the Rewa River. The north of the city to its northeast contains the rainforest park areas of Colo-i-Suva and Sawani, along the Princes Road, connecting at the Rewa River Bridge. This entire conurbation, is generally referred to by locals as Suva, although it contains four local government areas. In formal reference, this complex has come to be known as the Suva–Nausori Corridor (where Lami is generally excluded) and is the most populous area in Fiji, with over 330,000 people.

Suva features a tropical rainforest climate under the Köppen climate classification. However, as a trade-wind climate which besides knows occasional cyclones, it is not equatorial. The city sees a copious amount of precipitation during the course of the year, with no true dry season due to no month having an average rainfall below 60 mm (2 in). Suva averages 3,000 mm (118.11 inches) of precipitation annually with its driest month, July averaging 125 mm (4.92 in). In fact, during all 12 months of the year, Suva receives substantial precipitation, such that the term "fine weather" in a weather report simply means "not actually raining". Like many other cities with a tropical rainforest climate, temperatures are relatively constant throughout the year, with an average high of about 28 °C (82 °F) and an average low of about 22 °C (72 °F).

Suva has a markedly higher rainfall than Nadi and the western side of Viti Levu, which is known to Suva citizens as "the burning west". The second Governor of Fiji, Sir Arthur Gordon, allegedly remarked that it rained in Suva like he had seen nowhere else before and that there was hardly a day without rain. The most copious rainfall is observed from November to May, while the slightly cooler months from June to October are considerably drier. 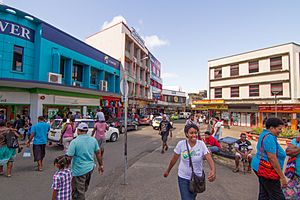 People on the street, Suva

Suva is a multiracial and multicultural city. Indigenous Fijians and Indo-Fijians, the two principal ethnic groups of Fiji, comprise the bulk of Suva's population, and the city is home to the majority of Fiji's ethnic minority populations, which include Rotumans, Lauans, Rambians, Caucasians (Europeans or Kaivalagi), part-Europeans (of European and Fijian descent), or Kailoma" and Chinese, amongst others. The most widely spoken language is English, but Fijian, Hindustani, and other languages are also spoken by their respective communities.

Suva boasts having representation of all major indigenous Pacific groups, and is sometimes referred to as the “New York of the Pacific". The city's reputation as a major economic centre in the region, and also its hosting of the University of the South Pacific's main campus has led to an influx of Pacific migrants who study, work and live in the city and its boroughs. 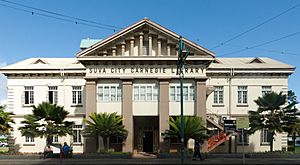 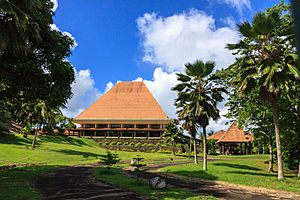 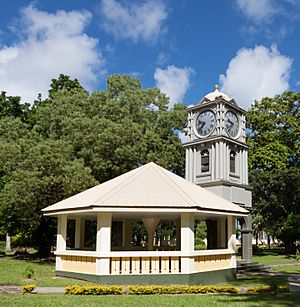 A well-known landmark is the Suva City Carnegie Library, built in 1909 as well as many other colonial buildings.

The government buildings complex sits on what was once the flowing waters of a creek. It was drained in 1935 and over five kilometres of reinforced concrete pilings were driven into the creek bed to support the massive buildings to be erected. After the foundation stone was laid in 1937, the building was completed in 1939; a new wing was completed in 1967. Parliament, however, was moved to a new complex on Ratu Sukuna Road in 1992.

The Suva campus of the University of the South Pacific (USP) occupies what was once a New Zealand military base. It is the largest of the many USP campuses dotted throughout the South Pacific and the largest university in the Pacific Islands outside Hawaii. It offers courses which are internationally recognised and endorsed.

The Fiji Museum, in Thurston Gardens, was founded in 1904 and originally occupied the old town hall, but moved to its present location in 1954. The museum houses the most extensive collection of Fijian artefacts in the world, and is also a research and educational institution, specialising in archaeology, the preservation of Fiji's oral tradition, and the publication of material on Fiji's language and culture.

Suva has around 78 parks, these include the new Takashi Suzuki Garden, Apted Park at Suva Point which is a popular spot for viewing sunrise and sunset, Thurston Gardens which was opened in 1913 and has flora from throughout the South Pacific.

In December 2009, there was an addition to Suva's skyline with the opening of TappooCity valued at US$25.7 million (FJD50 million) a joint venture six-storey low-rise building project by FNPF & Tappoo Group of Companies as Fiji's (and South Pacific's) largest department mall at present outside Australia & New Zealand.

Construction work began in January 2011 for a FJD30 million mini-mall complex at Grantham Road behind the Sports-City Complex and close proximity to University of the South Pacific, which will house restaurants, retail outlets and cinemas. Although construction was scheduled for end 2011, this complex will now be ready mid-2012. 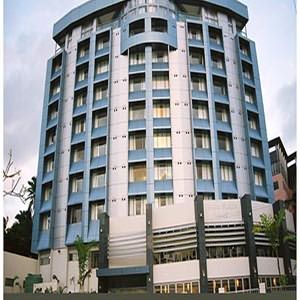 Unlike most cities and towns in Fiji and indeed many around the world, Suva did not grow around one industry but has gradually developed as a hub and the largest and most sophisticated city in the Pacific Islands. Fijians of Indian descent have largely shaped the economy of Fiji, contributing immensely to the growth of Suva and its status as the economic and political capital of Fiji. Suva is the commercial center of Fiji with most banks having their Pacific headquarters here, including ANZ and the Westpac Bank. Most national financial institutions, non-governmental organisations and government ministries and departments are headquartered here. At one point both Air Pacific (now called Fiji Airways and Air Fiji) were headquartered in Suva.

A large part of Fiji's international shipping is conducted at Suva's Kings Wharf as well as docking of international cruise ships, which has led to a growth in Suva's tourism industry. Many services are provided in Suva and is the basis of Suva's industrial and commercial activity.

There are large industrial areas, the largest being at Walu Bay, where there is a saturation of factories and warehouses and import and export companies. This area contains many shipyards for ship building and repairs as well as container yards. There is a brewery and many printeries. Other notable industrial zones are located in Vatuwaqa, Raiwaqa and Laucala Beach.

All content from Kiddle encyclopedia articles (including the article images and facts) can be freely used under Attribution-ShareAlike license, unless stated otherwise. Cite this article:
Suva Facts for Kids. Kiddle Encyclopedia.