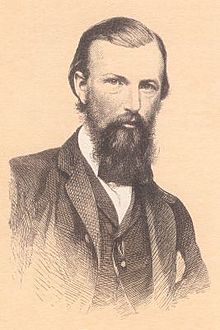 William John Wills (1834—1861) was an English surveyor. He was born in Totnes, Devon. He became one of the first explorers to cross Australia from the south to the north. The expedition became known as the Burke and Wills expedition. It ended in disaster, when both Wills and the leader, Robert O'Hara Burke, died from starvation at Cooper Creek on their return journey.

All content from Kiddle encyclopedia articles (including the article images and facts) can be freely used under Attribution-ShareAlike license, unless stated otherwise. Cite this article:
William John Wills Facts for Kids. Kiddle Encyclopedia.