It is the administrative centre of the Shire of Carpentaria. It has a tropical savanna climate and the main economy of the locality is cattle grazing.

The town is one terminus of the isolated Normanton to Croydon railway line, which was built during gold rush days in the 1890s. The Gulflander passenger train operates once a week.

The "Big Barramundi" and a statue of a large saltwater crocodile are notable attractions of the town, along with many heritage-listed sites.

Normanton is in the Gulf Country region of northwest Queensland, just south of the Gulf of Carpentaria, on the Norman River.

The site for the town was selected because Burketown was abandoned owing to fever and flooding. Settlers moved into the town in 1867. Normanton attracted people from a variety of cultures, including Chinese drawn to the gold fields. The population reached 1,251 by 1891. The gold boom was short-lived. By 1947 the town's population had declined to 234. Norman River Post Office opened on 13 June 1868 and was renamed Normanton by 1872.

The town contains the longest intact and operating Burns Philp store in Queensland. The general mercantile store and agency office was opened in 1884.

Normanton has a number of heritage-listed sites, including: 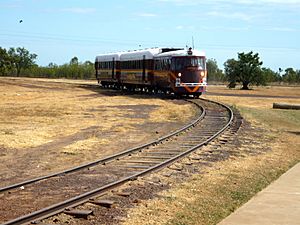 Six kilometres south of the town is the start of the Gulf Developmental Road, part of the Savannah Way tourist drive. The Normanton railway station features a large steel frame with an open canopy to provide shade.

Normanton has a tropical savanna climate with two distinct seasons. There is a hot, humid and extremely uncomfortable wet season from December to March and a hot and generally rainless dry season usually extending from April to November. During the wet season most roads in the area are usually closed by heavy rainfall, which on several occasions has exceeded 650 millimetres (26 in) in a month or 250 millimetres (10 in) in a day from tropical cyclones. On occasions, as with all of Queensland, the wet season may fail and deliver as little as 240 millimetres (9.4 in) between December 1934 and March 1935

Temperatures are uniformly hot, ranging from 36.8 °C (98 °F) in November just before the wet season begins to 29 °C (84 °F) at the height of the dry season in July. In the wet season, temperatures are marginally lower, but extremely high humidity means conditions are very uncomfortable and wet bulb temperatures averages 25 °C (77 °F) and can reach 28 °C (82 °F). In the dry season, lower humidity, cloudless days and cool nights provides for more pleasant conditions.

An early October sunset at the nearby Mutton Hole Wetlands

The major industry is cattle grazing with a number of homesteads in the locality, including:

Tourism has recently become an important part of the economy of Normanton, with the Gulflander a significant draw-card.

Among Normanton's most notable features is a statue of an 8.64-metre (28.3 ft) long saltwater crocodile named Krys, the largest ever taken, which was shot by Krystina Pawlowska in July 1957 in the Norman River. 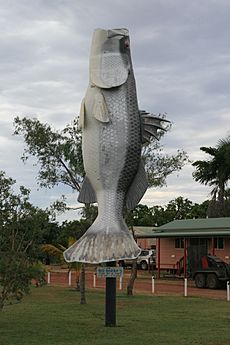 Barramundi and threadfin salmon can be caught in the river.

There are a number of reminders of Normanton’s history and development that visitors to the area are still able to see today.  These include the Normanton cemetery which dates from 1867, the railway station and the station building both dating from 1891, as well as the former Burns Philp & Co. store.

Normanton has a number of heritage-listed sites, including:

All content from Kiddle encyclopedia articles (including the article images and facts) can be freely used under Attribution-ShareAlike license, unless stated otherwise. Cite this article:
Normanton, Queensland Facts for Kids. Kiddle Encyclopedia.