Croydon is a town and locality within the Shire of Croydon in Queensland, Australia. At the 2011 census, the town and surrounding area recorded a population of 312 people. It is a terminus for the Normanton to Croydon railway line, which operates the Gulflander tourist train.

The historic goldrush town of Croydon is located in the heart of the Gulf Savannah, 529 kilometres (329 mi) west of Cairns. Croydon was a large pastoral holding covering an area of approximately 5,000 square kilometres (2,000 sq mi), when first settled in the 1880s. The town's name is derived from a pastoral run name, used by Alexander Brown and William Chalmers Brown, pastoralists; William Chalmers Brown was born in Croydon, England in 1841. Gold was discovered in 1885 and by 1887, the town's population had reached 7,000. Croydon Post Office opened on 20 March 1886.

Gold was to be the main economic production of the area for four decades. The Mining Warden left in 1926 as there were too few miners left on the field. During its heyday, Croydon was the fourth largest town in the colony of Queensland.

In 1917, Dr. Elkington, Director of the Division of Tropical Hygiene, Commonwealth Department of Health, was concerned about health and hygiene of its growing population, contemplated conducting a statistical and social survey of the town, which did not eventuate. Elkington's interest in sociological surveys of gathering social and economic details on a population later developed into the 1924 Sociological Survey of White Women conducted from the Institute of Tropical Medicine in Townsville.

Currently, Croydon has a much smaller population, having greatly decreased following the end of the gold rush. The population is now a few hundred people. The town is one of the termini for the Gulflander railway, opened for the gold rush in 1891 but now a tourist railway operated by Traveltrain. In early 2009, the close proximity of a receding cyclone ex-Cyclone Charlotte, caused torrential rain and Croydon to be flooded. An estimated $5 million of damage was made to town infrastructure. 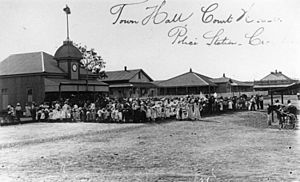 Croydon has a number of heritage-listed sites, including: 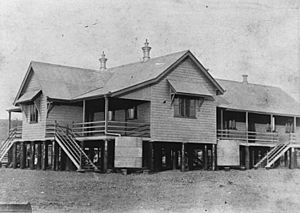 Croydon State School is a government primary school (years P-6) in Brown Street. In 2014, it had 42 students enrolled with 2 classes (years P-3 and years 4-6) with 3 teachers.

Croydon was mentioned in the 1950 novel "A Town Like Alice" by Nevil Shute, as an example of a largely abandoned gold rush town.

All content from Kiddle encyclopedia articles (including the article images and facts) can be freely used under Attribution-ShareAlike license, unless stated otherwise. Cite this article:
Croydon, Queensland Facts for Kids. Kiddle Encyclopedia.