Mornington Island is the northernmost of 22 islands that form the Wellesley Islands group. The island is in the Gulf of Carpentaria and is part of the Gulf Country region in the Australian state of Queensland. The Manowar and Rocky Islands Important Bird Area lies about 40 kilometres (25 mi) to the north-west. Mornington is the largest of the islands.

The general topography of the island is flat with the maximum elevation of 500 feet (150 metres). The island is fringed by mangrove forests and contains 10 estuaries, all in near pristine condition.

Lardil are the predominant clan group on Mornington Island and are the traditional owners of the land and surrounding seas. The Kiadilt clan arrived more recently (1947) from nearby Bentinck Island, when that island's water supply was contaminated by salt after a cyclone. Recent re-building work on aboriginal housing has been undertaken by the James Fraser Foundation, a non-profit organisation in Queensland. 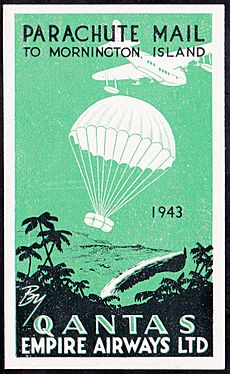 Macassan trepangers once travelled thousands of kilometres from Sulawesi to Mornington Island and other Australian mainland destinations in search of sea cucumbers. The eastern cape of the island was named Cape Van Diemen after Anthony van Diemen. Commander Matthew Flinders named the island after Richard Wellesley, 1st Marquess Wellesley who was known as The Earl of Mornington.

The Mornington Island Airport was a temporary airfield used by the RAAF and allied air forces during World War II.

In 1978, the Queensland government decided to take over control of both the Aurukun and Mornington Island Aboriginal reserves.

Mornington Island was the site of research over several decades by British anthropologist David McKnight, described in a series of books, People, Countries, and the Rainbow Serpent: Systems of classification among the Lardil of Mornington Island (1999), From Hunting to Drinking: The devastating effects of alcohol on an Australian Aboriginal community (2002), Going the Whiteman’s Way: Kinship and marriage among Australian Aborigines (2004) and Of Marriage, Violence and Sorcery: The quest for power in northern Queensland (2005). McKnight lamented the increasing levels of violence since the 1970s.

Indigenous art of Mornington Island is described in The Heart of Everything: The art and artists of Mornington & Bentinck Islands, ed. N. Evans, L. Martin-Chew and P. Memmott (2008).

A tribe of indigenous people on the island have been communicating with wild Indo-Pacific bottlenose dolphins for millennium. It is said that they have"a medicine man who calls the dolphins and “speaks” to them telepathically. By these communications he assures that the tribes’ fortunes and happiness are maintained."

Location within the Wellesley Islands

All content from Kiddle encyclopedia articles (including the article images and facts) can be freely used under Attribution-ShareAlike license, unless stated otherwise. Cite this article:
Mornington Island Facts for Kids. Kiddle Encyclopedia.