Cloncurry is a town and locality in the Shire of Cloncurry, Queensland, Australia. It is the administrative centre of the shire. In the 2011 census, Cloncurry had a population of 2,796 people.

Cloncurry is known as the Friendly Heart of the Great North West and will celebrate its 150th anniversary in 2017.

Cloncurry is situated in the north-west of Queensland, 770 kilometres west of the city of Townsville via the Flinders Highway. The town lies adjacent to the Cloncurry River. 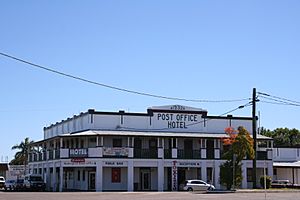 Cattle grazing is the significant industry in the region, and a large sale yards is located in the town.

The first Europeans to traverse the area were Burke and Wills on their epic, and ultimately fatal, transcontinental expedition. The Cloncurry River was named by Burke after Lady Elizabeth Cloncurry, his cousin, with the town eventually taking its name from the river.

Ernest Henry discovered copper in the area in 1867, and the town sprang up to service the Great Australia Mine to the south. Roger Sheaffe established the first pastoral run in the Cloncurry district - "Fort Constantine". Gold was discovered at Top Camp. The town was surveyed in 1876. Cloncurry was proclaimed a town in 1884. 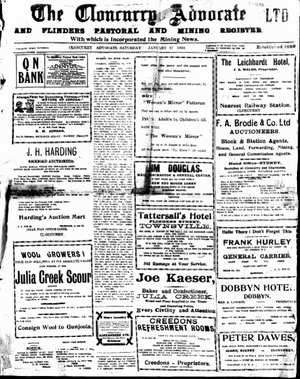 The Cloncurry Advocate was a newspaper published in Cloncurry between 1889 and 1953.

Queensland's Northern Line railway reached Cloncurry in December 1907 and was officially opened the next year.

In 1914 a fire broke out in the town resulting in the destruction of the Post Office, the hotel, eleven shops, two store-rooms and a cottage. The telegraph office was saved by employees who kept the office damp and protected with wet blankets. One man died in the blaze which cost an estimated £15,000.

The discovery of uranium at Mary Kathleen brought wealth to the community in the 1950s. Until the development of Mount Isa in the 1960s, Cloncurry was the administrative centre of the region.

Cloncurry has a number of heritage-listed sites, including:

Cloncurry was widely regarded as holding the record for the highest temperature recorded in Australia at 53.1 °C (127.5 °F) on 16 January 1889. Recent investigations have revealed that this temperature was measured in an improvised screen made from a beer crate and that it equated to 47–49 °C under standard conditions. The highest temperature ever recorded at Cloncurry's current weather station is 46.9 °C (116.4 °F), well short of the now widely disputed 1889 temperature of 53.1 °C. The average annual rainfall is 584.5 mm (23.0 in), almost all of which falls between the months of December to March

Because of the area's extreme solar conditions, Cloncurry was expected to become Australia's first solar-powered town. However the planned 10MW Thermal solar plant was scrapped due to light pollution concerns and a 2.128MW flat panel photovoltaic solar farm was to be built in its place. However, the Queensland Government withdrew financial support for the solar farm in May, 2012.

Cloncurry has linkages to other destinations via major coach operators such as Greyhound and Bus Queensland. A weekday service to Mount Isa is operated by Cloncurry Coaches as well as local charter services within the area for mining, school, sporting bodies and special events.

All content from Kiddle encyclopedia articles (including the article images and facts) can be freely used under Attribution-ShareAlike license, unless stated otherwise. Cite this article:
Cloncurry, Queensland Facts for Kids. Kiddle Encyclopedia.