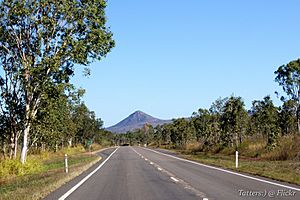 Southbound on the Flinders Highway between Reid River and Mingela 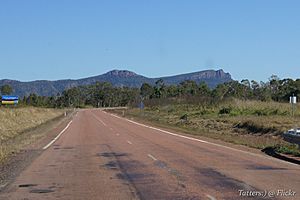 Southbound on the Flinders Highway between Calcium and Reid River

The Flinders Highway is a highway that crosses Queensland east to west, from Townsville on the Pacific coast to Cloncurry. The road continues as the Barkly Highway from Cloncurry to the Northern Territory border at Camooweal and beyond. The Flinders Highway passes a number of small outback towns and typical outback landscape predominates towards the inland. It was known as National Route 78 before Queensland began to convert to the alphanumeric system being adopted in Australia and is now designated as A6. The highway is also known as Overlanders Way. Its entire length is part of the National Land Transport Network (formerly Auslink). 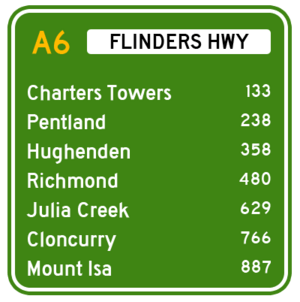 As at 1957, only the Townsville to Charters Towers section was sealed. The rest of the highway was progressively sealed with the last section completed in November 1976.

Charters Towers, 133 km to the south west from Townsville. A former gold rush town with a population of 30 000 in 1890. At that time it was known as "The World" because it seemed to be the centre of everything. Presently it is a centre for cattle grazing, with gold mining continuing to be an important industry. Much of the elegant gold rush architecture of the nineteenth remains in place and is a tourist attraction.

Located 243 km further on, Hughenden, the administrative centre of Flinders shire is in the heart of sheep and cattle country.

All content from Kiddle encyclopedia articles (including the article images and facts) can be freely used under Attribution-ShareAlike license, unless stated otherwise. Cite this article:
Flinders Highway, Queensland Facts for Kids. Kiddle Encyclopedia.