Burketown is an isolated outback town and coastal locality in the Shire of Burke, Queensland, Australia. In the 2016 census the locality of Burketown had a population of 238 people.

The town is the administrative centre of the Burke Shire Council.

Aboriginal Australian peoples had inhabited the region for millennia before European explorers travelled the area. The Yukulta / Ganggalidda and Garawa peoples are recognised as the traditional owners of the Burketown area. Native title was recognised on 1 April 2015.

A mission was established in 1930 at Burketown by Len and Dorothy Akehurst, who were members of the Christian Brethren. In 1932–33 the Akehursts moved the mission to Bayley Point, near Doomadgee, about 100 kilometres (62 mi) away, at the request of the Aboriginal people, creating Dumaji, or the Old Doomadgee Mission.

Prior to the establishment of Doomadgee Mission, many Aboriginal children in the Gulf region were removed to Mornington Island Mission and other missions and Aboriginal reserves further south. Queensland Government records indicate that over 160 people were removed from Burketown between 1900 and 1974.

On 2 August 1841, Captain J. Lort Stokes was the first European to discover the mouth of a river, which he named the "Albert" after Prince Albert, the Queens consort. Stokes' party ascended the river for a distance of 50 river miles in a long boat in a search of fresh water. Having followed a bumper wet season Stokes was greeted by endless grassy plains, which he named "The Plains of Promise" after a day of exploration. The area was originally named for the 'Plains of Promise' or 'Province of Albert' after Prince Albert, the Queen's Consort in 1841.

Burketown, or "Burke Town", was named in honour of explorer Robert O'Hara Burke, who died shortly after making the first recorded successful south-north crossing of the continent in 1860-1. The first European settlers arrived in the local region not long after Burke and partner William John Wills' expedition. By the mid-1860s, several cattle stations - including Gregory Downs, Floraville, and Donors Hill - had been founded inland from the present site of Burketown. Burketown was formally established in 1865 by Robert Towns, chiefly to serve as a port and supply centre for his extensive properties in the Gulf country. Towns chartered a small vessel the Jacmel Packet and on 12 June 1865 it arrived off the mouth of the Albert River. The goods were eventually landed on the present site of Burketown. Towns, a prominent Sydney pastoralist and financier, also established Townsville in the same year.

By September 1865 the population was about 40 and by October a store and a hotel were under construction, the balance of buildings were humpies. Rations and grog were plentiful but already one evil was noted: prices for goods were so high that some intended settlers could not stay. The town grew; however currency, both notes and coins, were so short in early Burketown that the business people issued their own currency, dubbed "shinplaster" or "calabashers". These were in the form of IOU's hand printed on tissue paper so that they had as short a life as possible. In February 1866 Lieutenant Wentworth D'Arcy UHR with 8 troopers and accompanied by William Landsborough, the first Police Magistrate, rode into Burketown where everyone carried a pistol and where a successful shop keeper could ride well, shoot well and be an able pugilist. The pioneer spirit was indomitable and the first official race meeting was held 25 July 1866 with prize money at $200 (sic). In October 1868 Towns and Co traded wool, tallow, hides and skins between Sweers Island and Batavia.

In the same year, settlement of the region heavily impacted upon the sovereign Indigenous peoples. With their lands stolen and hunting grounds denied, local Aboriginal peoples hunted the horses of the settlers. Retribution by the settlers was enacted under Sub Inspector Uhr and was assisted by the arrival of the Queensland Native Police. A massacre of 30 Aboriginal people took place after 12 horses were killed. A further 29 Aboriginal people were murdered shortly afterwards by shooting and bludgeoning.

Burketown was used by explorer Francis Cadell as a staging point for refitting and refuelling the steamer Eagle and collecting mail and fresh supplies during his 1867–68 survey of the Northern Territory coastline.

At first, hopes the town would develop into a major settlement in north-western Queensland were high. At the first land sale on 14 August 1867, 75 allotments were sold. However, from 1866 tropical diseases ravaged the population. The vessel "Margaret and Mary" from Sydney came into port rife with "The Fever" (never properly identified, thought to be Typhoid). Between 25 and 50 people died - the majority of the crew and passengers - including the Captain's wife. Landsborough evacuated many survivors to Sweers Island for a period of 18 months, where a further two died and were buried on the Island.

The town was devastated by a tropical cyclone on 5 March 1887 which flooded almost all of Burketown. Only the highest part of town, near where the Council Office is currently located, escaped the waters from the Gulf of Carpentaria. A copy of a 1918 report to the Queensland Parliament from the Department of Harbours and Rivers Engineers refers to the sea rising to 5.5 metres above the highest spring tide level at the Albert River Heads. This level is about 8 metres above Australian Height Datum. Seven people of the population of 138 died in the cyclone.

Burketown has a number of heritage-listed sites, including:

Burketown has a semi-arid climate (Köppen BSh), though closely bordering on a tropical savanna climate (Aw), characterised by hot, humid and wet summers and warm, extremely dry winters. December is the hottest month, with average maximum temperatures rising to 35.4 °C (95.7 °F). Rainfall is minimal from April to November, but from December to March monthly rainfalls of over 500 millimetres (20 in) and daily falls over 250 millimetres (10 in) are not rare. Flooding, often associated with the passage of a tropical cyclone, often isolates the community for months, whilst failure of the summer rains can be extreme — for instance in the 1901/1902 wet season no more than 172 millimetres (6.77 in) fell and the drought caused the death of millions of cattle. 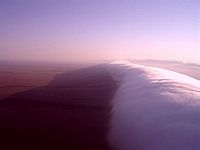 A Morning Glory cloud near Burketown.

From the months of August to November, a rare meteorological phenomenon known as "Morning Glory" - long, tubular clouds, some up to 1,000 kilometres (620 mi) in length - is often observed in the skies above Burketown. The Morning Glory has become something of a "mecca" for soaring pilots who surf the giant atmospheric wave in their gliders. Gliding flights of over 500 kilometres (310 mi) have become common.

Burketown has a school (Prep to Year 6), police station, post office, council office, service station, small general stores/ take-away shops, bakery and butcher caravan park, outpost hospital and a hotel. It is serviced by the Royal Flying Doctor Service from Mount Isa Base. The Burke Shire Council operate the Burketown Airport which has a regular passenger service from Regional Express Airlines and is also the primary base of Savannah Aviation, which provides aircraft charter services throughout the Gulf, far north/western Queensland and the Northern Territory. On 22 March 2012 the 92-year-old pub was destroyed in an early morning fire. The pub was subsequently rebuilt. The Burke Shire Council operates a public library at Lot 65, Musgrave Street.

Burketown is known as the Barramundi capital of Australia and holds an annual Barramundi Fishing Competition during Easter.

Escott Station, which includes a tourist lodge, is about 17 kilometres (11 mi) from Burketown.

Burketown is believed to be the basis of “Willstown” (note the name of Burke’s partner, above), a very amenity-challenged town fictionally developed into a successful and growing community to become A Town Like Alice by Jean Paget, a character created by Nevil Shute in his bestselling novel of that name.

All content from Kiddle encyclopedia articles (including the article images and facts) can be freely used under Attribution-ShareAlike license, unless stated otherwise. Cite this article:
Burketown Facts for Kids. Kiddle Encyclopedia.