Mount Isa ( EYE-zə) is a city in the Gulf Country region of Queensland, Australia. It came into existence because of the vast mineral deposits found in the area. Mount Isa Mines (MIM) is one of the most productive single mines in world history, based on combined production of lead, silver, copper and zinc.

With an estimated urban population of 21,821 as at June 2015, Mount Isa is the administrative, commercial and industrial centre for the state's vast north-western region. Although situated in an arid area, the artificial Lake Moondarra 19 kilometres (12 mi) north of the city on the Leichhardt River provides both drinking water and an area for watersports, birdwatching and recreation. Locals often refer to Mount Isa as "The Isa".

Due to the lead production in the city, Mount Isa has one of the most intensive air quality monitoring systems in Australia. Concerns have been raised over childhood lead contamination and air pollution within the city. The Mount Isa Mines (MIM) in particular are a source of significant lead pollution. 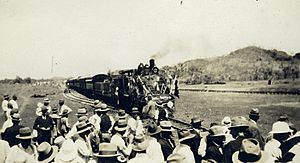 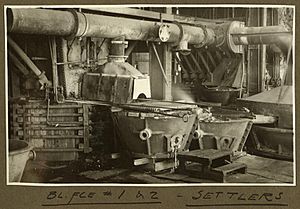 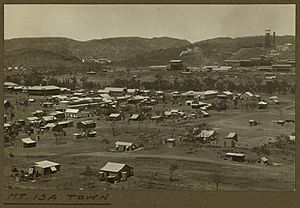 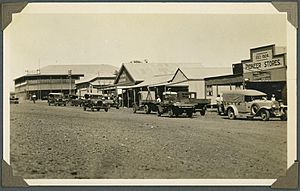 The land around the present day city of Mount Isa was home to the Kalkadoon aboriginal tribe. The Kalkadoon tribe led a subsistence lifestyle on this land that the white settlers looked at as nothing but poor grazing land, with the odd mineral deposit. As settlers and prospectors pressed further into their lands the Kalkadoon tribe members set out on one of Australia's most successful guerrilla wars in a fight for their lands. Their success continued until at Battle Mountain in 1884, with what some historians have called a rush of blood, the tribe attacked a fortified position in large numbers and suffered terrible losses. The weakened state of the tribe made their land more vulnerable to the settlers and soon much of the land was lost. Armed patrols chasing the surviving tribe members and poor grazing lands for the settlers made times hard in the area over the following decades.

It is said that a lone prospector, John Campbell Miles, stumbled upon one of the world's richest deposits of copper, silver and zinc during his 1923 expedition into the Northern Territory, but many people do not know that he was taken to the deposits by a young aboriginal man by the name of Kabalulumana (for whom an Indigenous person's hostel in Mount Isa is named). When Miles inspected the yellow-black rocks in a nearby outcrop, they reminded him of the ore found in the Broken Hill mine that he had once worked at. Upon inspection these rocks were weighty and heavily mineralised. A sample sent away to the assayer in Cloncurry confirmed their value. Miles and four farmers staked out the first claims in the area. Taken with friend's stories of the Mount Ida gold mines in Western Australia, Miles decided upon Mount Isa as the name for his new claim.

A location for the town's hospital was chosen in 1929, with a small building completed the following year. In 1931, a larger structure was moved to the site from the closed mining town of Kuridala.

Mount Isa has a number of heritage-listed sites, including:

Mount Isa experiences a hot semi-arid climate (Köppen climate classification BSh). The summer/wet season is very hot with highly variable rainfall and humidity owing to the erratic influence of the monsoon. This can be almost non-existent in years like 1985/1986, where as little as 83 millimetres (3.3 in) fell from December to March, or extremely intense as in 1973/1974 when 789 mm (31.1 in) of rain fell over the same period. A typical summer includes numerous hot windy days over 40 °C with clear skies and low humidity, a few weeks of 35-40 °C temperatures with higher humidity and spectacular thunderstorms and a few days with heavy monsoon rain and cooler conditions below 30 °C.

Mount Isa also has a cinema complex, situated in the inner city on Rodeo Drive, that contains three air-conditioned cinemas, a skate park/aquatic centre and a multi-purpose sporting complex for basketball and other indoor sports. Mount Isa's events complex, Buchanan Park, opened in May 2007, can hold up to 6,000 people and is used for special events such as concerts and expos. It is also the home of the city's annual show and rodeo.

In 2008, plans were made to build a massive motor sports complex on the city's north-eastern outskirts, but as of 2016 it had not been built.

The city is known for its annual Rodeo and Mardi Gras street parade every August. There is also an annual Multicultural Festival in early September.

In July 2015, Mt Isa formed its own Symphony Orchestra, acclaimed as the "most remote in the world". Inaugurated on 23 July, the event attracted several stars of the music world, including world-famous jazz musician James Morrison. Morrison also figured in the premiere of Matthew Dewey's 'Symphony of the Inland Sea', composed for the occasion.

On the 5th March 2017, Mount Isa was chosen as a host city of the 2018 Commonwealth Games Queen's Baton Relay, along with Cloncurry, Hughenden, Winton and Birdsville. The baton will pass through the CBD and suburbs and regions on route before the opening ceremony on the Gold Coast.

Mount Isa had an estimated resident population of 21,821 people in 2015, housed in 6,285 dwellings, making the city the largest and most populous in Queensland's western interior, and one of the largest centres in outback Australia. The district population is 30,942 and incorporates the Cloncurry, Boulia, Burketown, Carpentaria, Doomadgee, Flinders, Mornington and Richmond shires.

The 2011 census found that 52.8% of residents were male and 47.2% were female. However, a rumour has circulated that the ratio of males to females living in Mount Isa was five to one. Former Mayor John Molony drew international press attention in August 2008 when he told the Townsville Bulletin newspaper that Mount Isa's gender imbalance made it a good place for "not so attractive" women to live. 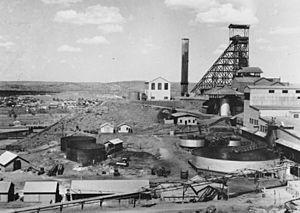 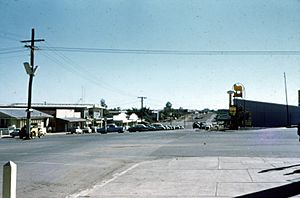 The Leichhardt River divides the city into areas known as "mineside" and "townside". Xstrata, the power station and the Airport are on the mineside, whilst the majority of the city, including the CBD and Base Hospital are on the townside. In recent years, population increases associated with the mining boom has increased demand for accommodation and land. The city has begun to spread out, with new suburbs in the south-east and north of the city being planned or developed. It is planned these expansions will cater for more than 40,000 people over the next 10 to 20 years.

Mount Isa city and surrounds are serviced by a 35 vehicle taxi service. A taxi service known as "Isa-Curry" express transports passengers to and from the neighbouring centre of Cloncurry to Mount Isa and back again, usually for shopping and medical requirements. Additionally, many of the city's clubs have courtesy buses to and from their establishments that run seven days a week and into the early hours of the morning. Mount Isa Coaches is a locally owned and operated coach company that provides tours and charter services to the local community as well as mining, sporting, school and airport transfers. Greyhound Australia has a depot in Mount Isa, with coach services to and from Townsville, Brisbane and Tennant Creek.

Mount Isa Airport has regular daily services to Brisbane, Cairns and Townsville, in addition to other services to remote Outback communities in western Queensland. The primary carriers which service Mount Isa and district are Qantas/QantasLink - Brisbane and Townsville; AirNorth - Darwin and Gold Coast; Regional Express - Townsville. In November 2009, it was announced that Skytrans and Westwing Aviation will commence flights in and out of Mount Isa to and from cities on the coast, commencing in February 2010. Regional Express (REX) also announced flights between Mount Isa and Townsville starting after December 2009. Virgin Australia (VA) began services in August 2012 and offers return services from Brisbane on weekdays.

The city is served by QR passenger train The Inlander, which travels overnight to Townsville twice a week in each direction.

All content from Kiddle encyclopedia articles (including the article images and facts) can be freely used under Attribution-ShareAlike license, unless stated otherwise. Cite this article:
Mount Isa Facts for Kids. Kiddle Encyclopedia.