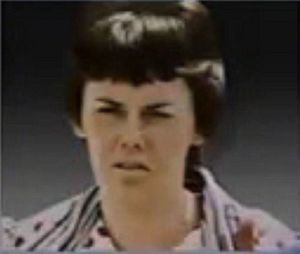 Alice Lynne "Lindy" Chamberlain-Creighton (née Murchison; born 4 March 1948) is a New Zealand-born Australian woman who was wrongfully convicted of the death of her nine-week-old daughter daughter Azaria in 1980. The event happened at a campsite near Uluru, Northern Territory. It was one of Australia's most notable murder trials. Chamberlain said that she saw a dingo leave the tent where Azaria was sleeping.

Chamberlain was born in Whakatāne, New Zealand. She married Michael Chamberlain in 1969. Aside from Azaria, the couple had three other children. They divorced in 1991. She married Rick Creighton in 1992.

In the movie Evil Angels (1988), Meryl Streep played the role of Chamberlain. Streep's performance earnt her an Academy Award nomination for Best Actress in 1989.

All content from Kiddle encyclopedia articles (including the article images and facts) can be freely used under Attribution-ShareAlike license, unless stated otherwise. Cite this article:
Lindy Chamberlain-Creighton Facts for Kids. Kiddle Encyclopedia.