Innisfail (from Irish: Inis Fáil) a town and locality in the Cassowary Coast Region in Far North Queensland, Australia. The town was originally called Geraldton until 1910. It is the major township of the Cassowary Coast Region and is well renowned for its sugar and banana industries, as well as for being one of Australia's wettest towns. In March 2006 Innisfail gained worldwide attention when severe Tropical Cyclone Larry passed over causing extensive damage. In the 2011 census, the town of Innisfail had a population of 7,176 people.

Prior to European settlement the Innisfail area was occupied by five separate societies of the Mamu people. These Aboriginal people followed migratory lifestyles in the rainforest and traversed rivers in string-bark canoes.

The first arrival of European people came in 1872 when survivors of the shipwreck, the "Maria" arrived on the coastal areas surrounding what is now the Johnstone River. Sub-Inspector Robert Arthur Johnstone's search party came with the intention of rescuing remaining survivors. The crew would later venture up river between what is today Flying Fish Point and Coquette Point. Johnstone wrote very highly of the area, stating:

A most glorious view appeared - a noble reach of fresh water, studded with blacks with their canoes and catamarans, others on the sandy beaches; deep blue fresh water expanding to an imposing breadth.

Johnstone named the area after himself and upon his recommendation the explorer George Elphinstone Dalrymple arrived in the area in September 1873 to chart the area further.

Later in 1879, Irishman Thomas Henry FitzGerald arrived in the area to establish a sugar industry. He was accompanied by large numbers of Kanaka South Sea Islanders workers accompanied by smaller numbers of Irish labourers. The house built by FitzGerald and thus the first establishment in the area was called Innisfallen, after the largest island in the Lakes of Killarney, Ireland. Inis Fáil (Island of Destiny) is an ancient Irish name for Ireland itself. The name is used in the rarely-sung third verse of "The Soldier's Song", the Irish national anthem. The stone mentioned may be the stone at Tara, Co Meath, at which high kings of Ireland were crowned. 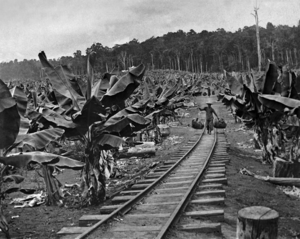 From 1879, the settlement was named Geraldton after FitzGerald, but in 1910 was renamed "Innisfail" to avoid confusion with the town of the same name in Western Australia.

Johnstone River Post Office opened on 1 November 1882 (a receiving office had been open from 1880), was renamed Geraldton two months later and Innisfail in 1910.

The 1920s and 1930s saw the beginning of a major period of settlement by Italian immigrants and noteworthy populations from Greece and Malta. Later in this period populations from Yugoslavia, India and the Philippines would also settle in the area.

Local rugby league footballer Kerry Boustead was the only player from outside the Sydney and Brisbane Leagues selected to represent Australia on the 1978 Kangaroo tour. 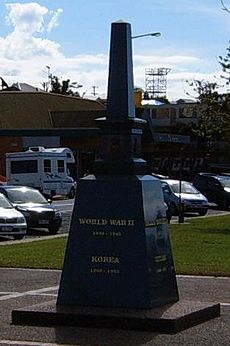 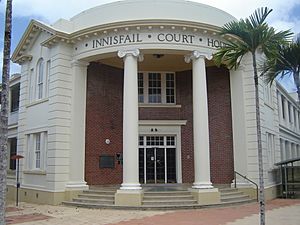 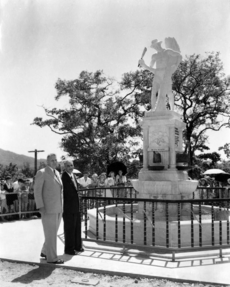 The Innisfail War Memorial in Jack Fossey Park on Fitzgerald Esplanade was dedicated on 16 April 2005; it commemorates those who served in all wars.

Today the town still boasts many good examples of the Art Deco and Streamline Moderne styles of architecture.

Innisfail has a number of heritage-listed sites, including: 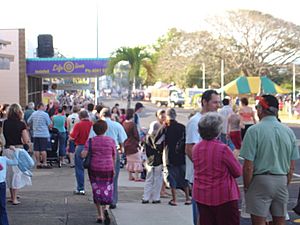 A large turnout of the Annual Harvest Festival Parade in 2005

A number of events take place annually to celebrate the cultural diversity within the Innisfail community:

Such events are extremely popular among residents and attract good turnouts.

In 2001 Los Angeles band Sugar Ray filmed part of their music DVD "Music in High Places" at the Johnstone Crocodile Farm in Innisfail.

Being a small community, and one that was recently subjected to a severe natural disaster Innisfail harbours a definite sense of community. The township has only 2 secondary schools: Good Counsel College and Innisfail State College and a single business district.

There are many events that act predominantly as community events, the main ones include:

While Innisfail was always reputed to have a positive sense of community spirit, the aftermath of Tropical Cyclone Larry and the unified cleanup effort acted to promote this spirit through shared suffering.

In the past Chinese Australians built the Innisfail Temple/Lit Sing Gung (列聖宮). It was originally a Chinese temple, but nowadays the building is open for rituals of every race and religion. The temple is located at Owen Street.[1] Home to many Italian residents.

Innisfail's town centre is situated at the junction of the North and South Johnstone Rivers, approximately 5 km (3 mi) from the coast. It is located near large tracts of old-growth tropical rainforest surrounded by vast areas of extensive farmlands. Queensland's highest mountain, Mount Bartle Frere; part of Australia's Great Dividing Range, is 15 kilometres (9 mi) to the north.

Innisfail experiences a tropical rainforest climate (Köppen climate classification Af) as it has no month with a mean temperature below 18 °C (64.4 °F) or with less than 60 millimetres (2.4 in) of rainfall. Consistently, humid, very warm to hot weather dominates in Innisfail. In particular Innisfail is reputed as being among the wettest towns in Australia. Babinda, 30 kilometres (19 mi) north of Innisfail is generally considered to be the wettest. Unlike most of tropical Australia, the southern winter or "dry" season is not completely dry as moist easterly winds bring frequent showers; rainfall is, however, still far lower than during the southern summer. Monthly totals of over 1,000 mm (39 in) are a routine occurrence in the region between January and April and some months will not experience a day without rain if the monsoon is unusually heavy. The town gets around 71.8 clear days per year. 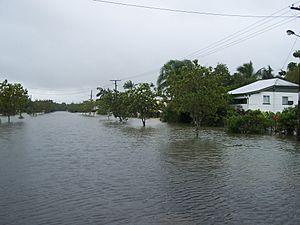 Howe St. in East Innisfail is commonly affected by even minor flooding

Innisfail is consistently under threat from tropical cyclones developing in the Coral Sea in and around summer months. Furthermore, high rainfall associated with aforementioned cyclones and monsoons, combined with Innisfail settlement on adjoining rivers causes flooding to be commonplace, occurring to varied degrees of severity annually. Innisfail suffered extensive damage in 2006 due to Cyclone Larry as the site of landfall and received over 100mm of rain in the span of three hours. 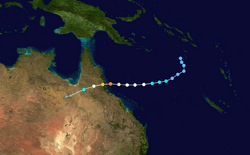 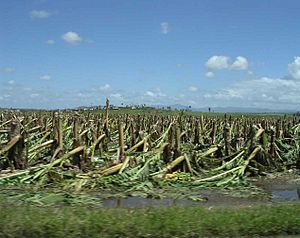 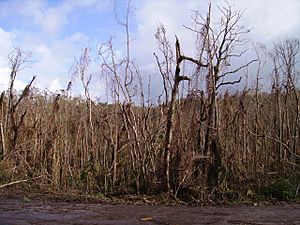 Tropical Cyclone Larry, an Australian Category 5 cyclone, struck the locality at 7am on 20 March 2006, with the eye of the storm passing over the town.

Severe structural damage occurred over the entirety of the township, the main damage being a portion of houses losing roofs and windows and the cyclone rendered even more homes structurally unsound. Power was effectively eliminated from the town and generators became a luxury in many homes. Clean drinking water was also compromised in many homes leading to health fears. The swift response of the Australian Defence Force was praised by many and the cleanup campaign they orchestrated allowed for total utilities restoration within 3 weeks. Severe damage was done to crops and plantations (mainly bananas) which had a serious economic impact on the region. Only one indirect death was record as a result of the cyclone.

Cyclone Larry was a direct and primary cause of the widely reported and dramatic surge in banana prices in Australia. Inflated cost remained until farmers were able to meet demand again in early 2007. In February 2011 Cyclone Yasi hit Innisfail.

In 2011, in the early morning of 3 February, Cyclone Yasi crossed the far north Queensland coast causing damage to the Innisfail area. Although the damage was not as severe as Cyclone Larry, Cyclone Yasi still had a huge impact on Innisfail bringing strong winds of possibly 285 kilometres per hour. 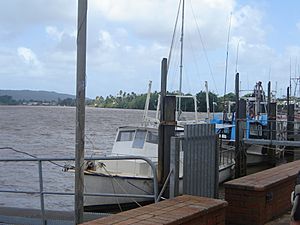 At present Innisfail has largely recovered from the devastation of Cyclone Larry. After the cyclone the township underwent something of an economic boom that stemmed from an influx of tradespeople and business eager to capitalize upon relatively significant insurance payouts. According to reports local trade had increased some 30 - 40% opposed to expected increases of 10%.

The main industries remain predominately banana and sugar cane and have since recovered from the natural disaster. Outlying areas of Innisfail have also resumed manufacture of tea, pawpaws and other exotic fruits.

Innisfail remains a popular destination for backpackers seeking employment in the fruit picking industry. Tourism is of importance to the township and the town consistently seeks to attract visitors passing through on the Bruce Highway.

All content from Kiddle encyclopedia articles (including the article images and facts) can be freely used under Attribution-ShareAlike license, unless stated otherwise. Cite this article:
Innisfail, Queensland Facts for Kids. Kiddle Encyclopedia.