East Innisfail is a suburb of Innisfail, Cassowary Coast Region, Queensland, Australia. The suburb links to the Innisfail CBD via the Jubilee Bridge over the Johnstone River and the Bruce Highway. In the 2011 census, East Innisfail had a population of 1,828 people.

The suburb has three churches, a park running along the river and East Innisfail State School. Land for the school was secured by the Department of Lands in 1935.

Historically the suburb was linked to the CBD by the old Jubilee Bridge, which was originally built in 1923.

Due to deterioration from both age and increased traffic flow, the Jubilee Bridge was closed on July 19, 2010 after concerns were raised over the safety and integrity of the structure. A new bridge was built, which opened on 2 September 2011.

In early 2011, some residents in low-lying areas of the suburb were evacuated ahead of the passing of Cyclone Yasi. Shortly after there were a number of cases of dengue fever recorded in the suburb. 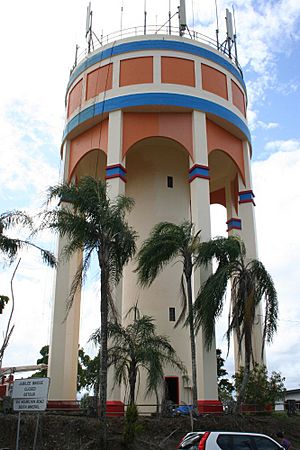 East Innisfail has a number of heritage-listed sites, including:

All content from Kiddle encyclopedia articles (including the article images and facts) can be freely used under Attribution-ShareAlike license, unless stated otherwise. Cite this article:
East Innisfail, Queensland Facts for Kids. Kiddle Encyclopedia.