Bowen is a town and locality in the Whitsunday Region on the eastern coast of Queensland, Australia. At the 2011 census, Bowen had a population of 10,260.

Bowen is located on the north-east coast, in North Queensland, Australia, at exactly twenty degrees south of the equator. The twentieth parallel crosses the main street. by road from Brisbane.

Bowen sits on a square peninsula, with the Coral Sea to the north, east, and south. To the south-east is Port Denison. On the western side, where the peninsula connects with the mainland, the Don River's alluvial plain provides fertile soil that supports a prosperous farming industry. 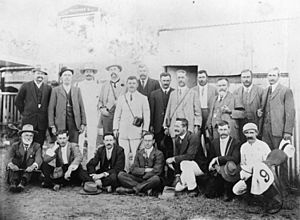 Captain James Cook named Cape Gloucester on his voyage of exploration up the Australian coast in 1770. This "cape" turned out to be an island, and Gloucester Island dominates the view from Bowen's eastern beaches. Behind the island is a bay that forms an excellent port, which the town came to be built around. This bay was eventually discovered in 1859 by Captain Henry Daniel Sinclair, in response to a reward offered by the colony of New South Wales for finding a port somewhere north of Rockhampton. Sinclair named Port Denison after the colonial governor of New South Wales, William Denison.

Establishment of the town

Two years later, Sinclair led one group of settlers by sea, and George Elphinstone Dalrymple led another party overland from Rockhampton. They met on 11 April 1861 at Port Denison and founded the town of Bowen on the next day, 13 April 1861. By this time, Queensland had separated from New South Wales, and the town was named after the first Queensland colonial governor, Sir George Bowen.

In 1863, the new settlers discovered a sailor, James Morril, who had been shipwrecked 17 years previously just to the north of Bowen. Morril made his home in the new town, and his grave is still to be seen in the Bowen cemetery.

The coral reefs around Bowen have several shipwrecks, including the SS Gothenburg which sank in 1875 with a loss of more than 100 lives. Numerous relics of Bowen's history, from the Aboriginal past onwards, are on display at the Bowen Historical Society's museum. 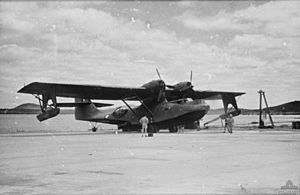 During World War 2 Bowen hosted an air force base, flying PBY Catalina flying boats to search for enemy ships and submarines. The concrete aprons and ramp are still present (2013), and silhouettes of two aircraft have been painted in.

Bowen has a number of heritage-listed sites, including: 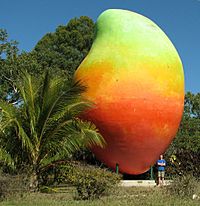 Bowen is on a peninsula, with ocean on three sides. This gives eight beaches surrounding the town, namely Kings Beach, Queens Beach, Horseshoe Bay, Murrays Bay, Greys Bay, Rose Bay, and the Front Beach. There is also the clothing-optional Coral Bay. Kings Beach offers views of nearby Gloucester Island. On the western half of Queens Beach and all of Kings Beach, it is permitted to walk a dog without a leash.

The Big Mango, costing $90,000 to create, was erected in 2002 as a tourist attraction at the Bowen Tourist Information Centre. In February 2014, the 10-metre high, seven-tonne fibreglass structure was stolen in an overnight operation. The mango was found the next day and it was later revealed that the theft had been a publicity stunt.

When it was announced that Australia was to be filmed in Bowen, locals painted a large "Bowenwood" sign on an old water tank on top of a hill, in a parody of the world-famous Hollywood sign.

All content from Kiddle encyclopedia articles (including the article images and facts) can be freely used under Attribution-ShareAlike license, unless stated otherwise. Cite this article:
Bowen, Queensland Facts for Kids. Kiddle Encyclopedia.