Proserpine ( locally) is a town in Whitsunday Region in the state of Queensland, Australia. It is situated on the Bruce Highway. It was founded in the 1890s. In the 2011 census, Proserpine had a population of 3,390. Proserpine is an anchor for the Whitsundays region, providing some key infrastructure, including the rail station, the mainland airport for scheduled jet services, two high schools, the hospital and other vital services. It is a future base for workers involved in nearby mines including the $22 billion Adani Carmichael coal project.

The town is located along the banks of the Proserpine River and is surrounded by vast flat areas of land primarily used for cane farming. It prides itself on its friendly atmosphere and in 2007 it won the Tourism Queensland Friendliest town award. Proserpine is experiencing a resurgence in economic growth fueled by its Airport gaining International services in 2017, its affordability and its short commute distance to the mines.

The town name Proserpine derives from the Proserpine River, whose name was derived from the legend of the Greek goddess Persephone (whose Latin name is Proserpine). 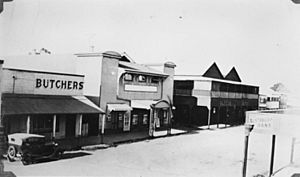 Main Street, Proserpine in the 1930s 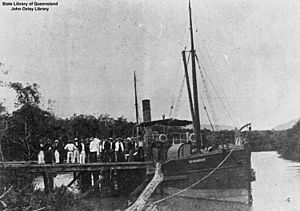 Steamer Brinawarr at The Proserpine Landing, Circa 1906

The town was founded around 1890 just after the sugar mill was constructed. The Postal Office opened in 1886. The town experienced high growth in the 1900s as the local sugar industry grew and exported raw sugar via the Proserpine Landing from here it was sent to refineries. At this time it was the fastest growing regional town in Queensland.

In the 1950s the Proserpine Airport was opened which increased the towns accessibility by air. In 1986 construction commenced on the Peter Faust Dam 25 kilometres (16 mi) NW of the town to be used for flood mitigation during the wet season and irrigation during the dry, the dam was completed in 1990 and was expected to take decades to fill but a passing cyclone helped boost levels close to maximum capacity. The 1990s saw the Proserpine Sugar Mill crush a record amount of cane in 1996.

Proserpine has a number of heritage-listed sites, including: 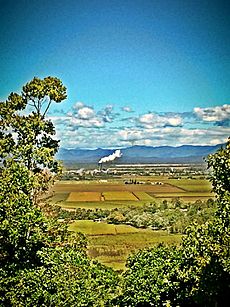 The mountains west of Proserpine.

The land around Proserpine is relatively flat. Some of the land is flood prone during the wet season but most of the land is less flood-prone then it used to be prior to the construction of the Peter Faust Dam. Clarke Range is located to the west, northwards is Dryander National Park and to the east is Conway National Park.

The Clarke Range to the west of the town contains the small, former gold mining town of Dittmer and provide a dramatic backdrop to the area. 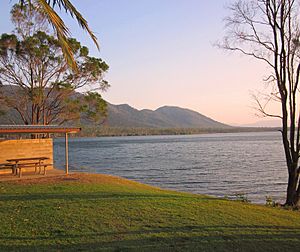 • Proserpine Mill chimneys. Twin chimneys that are 62m tall (equivalent to 18 stories) and dominate the skyline.

• Art Deco façades in Main St. A lot of the shops in Main St have art deco façades. Most are in disrepair and require restoration. 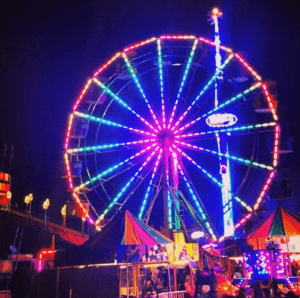 The Proserpine Show is held at the Proserpine Showground around 24–25 June. It is a typical show with carnival rides, sideshow alley and fireworks. The Harvest Festival is generally held in October, around the 20th of the month, as a celebration of the end of sugar crushing at the mill. It includes carnival rides at Les Stagg Oval and a parade with floats through the Main Street. The Proserpine Rotary Christmas Fair is an annual event held on 16 December. Main Street is closed off and stall holders take the place of cars. Most shops open or stay open until late and take advantage of the increased business by offering discounts, special deals.

Internet services are of excellent standard in the town with access to the National Broadband Network and 4G LTE mobile services available from all major carriers.

There are Whitsunday Transit bus services to and from Airlie Beach and a connection service to Proserpine / Whitsunday Coast Airport. The main bus stations are located in Mill Street (in front of Mill Street Park) and Blair Street (outside of the BP Service station).

Taxi services operate 24/7 in the town and a taxi rank is located outside the courthouse. 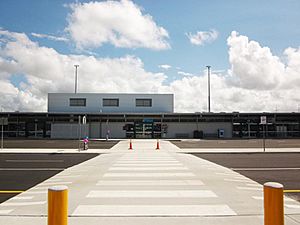 Proserpine Airport has flights to Sydney, Brisbane, Melbourne as of December 2015. The airport opened in 1951 and the first flight landed at it on 3 November the same year. It was a flight from Brisbane in a Douglas DC-3.

The terminal recently underwent an upgrade in 2010/11 and the newly upgraded terminal was officially opened on 20 December 2011. This upgrade provided an expanded parking area with the introduction of paid parking, new luggage carousel, more check-in counters and an overall new look. The local council announced in early 2013 that it was considering entering a partnership with a private company to further expand the terminal to triple its present size. Access to the airport is via the Bruce Highway and Sir Reginald Ansett Drive by either private vehicle, or by bus.

In 2017 the Airport will gain International status, with the first flights expected to be to Auckland, the largest city of New Zealand followed by flights to Mainland China. 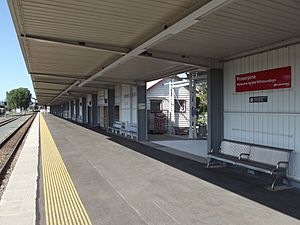 Proserpine is located on the North Coast line and has services between Brisbane and Cairns provided by the Spirit of Queensland which depart from Proserpine Station located in Hinschen Street almost at the geographical centre of the town. It was opened on 2 July 1910 and Governor William MacGregor was in attendance having arrived on a special train, the opening was timed to coincide with the Proserpine Show. Regular services to Bowen commenced on 18 July 1910 (was later connected to Mackay and subsequently Brisbane). The station is fairly long and is also used for freight. It has restroom facilities, covered waiting areas, arrival and departure announcements and coaches that provide connections to surrounding areas meet every arriving train. 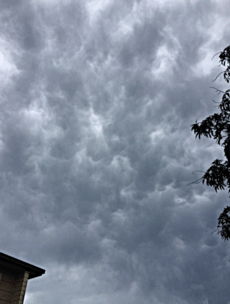 Proserpine's climate consists of two main seasons. The "Wet Season" (November to April) and The "dry season" (May to November). The wet season is usually relatively humid with high rainfall in most years and the dry season is cool and pleasant with scarce rainfall and low humidity. The peak season for tourism is during the winter months owing to the reliable extended runs of clear weather which are ideal for outdoor activities.

The town has a humid subtropical climate (CWa) under the Köppen climate classification. During winter temperatures in outlying areas sometimes dip below zero but rarely in Proserpine itself due to the Urban heat island effect. The same occurs with Fog as it is usually denser in locations out of town.

The area has been affected by tropical cyclones most significantly Cyclone Ada in January 1970 and Cyclone Ului in March 2010. It was also affected (but to a lesser extent than southern and western areas) by the 2009 Australian dust storm.

A cyclone shelter was completed in February 2013 at Proserpine State Primary School and was a joint project between the Queensland Government and the Government of the Emirate of Abu Dhabi the latter committing $30million AUD towards the cyclone shelter program for which the community is very thankful. At more than 1,500 square metres, they can provide shelter for up to 800 people and are equipped with features to ensure people’s comfort and safety, such as a backup generator, a kitchen, 10 toilets and five showers. Mr Faisal Saif Almazrouei, Third Secretary at the Embassy of the United Arab Emirates (UAE) attended the official opening of the Proserpine Shelter on March 26, 2013.

All content from Kiddle encyclopedia articles (including the article images and facts) can be freely used under Attribution-ShareAlike license, unless stated otherwise. Cite this article:
Proserpine, Queensland Facts for Kids. Kiddle Encyclopedia.