Aramac is a small town and locality in the Barcaldine Region, Queensland, Australia. In the 2011 census, Aramac had a population of 299 people.

Aramac is located 68 kilometres (42 mi) north of Barcaldine, and 1,280 kilometres (800 mi) by road from the state capital, Brisbane. It is situated on Aramac Creek, which flows into the Thomson River 60 kilometres (37 mi) west of town.

The predominant industry is grazing. The town water for Aramac is supplied from two bores connecting into the Great Artesian Basin.

In the 1850s, pastoralist and future Premier of Queensland Robert Ramsey Mackenzie travelled through the area. He blazed a tree with the inscription 'R R Mac', which was later corrupted into the name of the town. William Landsborough also explored the area in 1859. Pastoral occupation began in 1862 on the Bowen Downs station on Reedy Creek, north of Aramac, and the Aramac Station (1863).

In 1867 an employee of Aramac Station, John William Kingston, opened a bark-hut store at an outlying point on the Aramac Creek. Enlarged two years later to include a hotel (Kingston's Bazaar), Kingston's settlement was declared a town site in 1869 and surveyed as a town in 1875. It was the region's first town, and the centre of the first local-government division.

The town was originally called Marathon. The name was changed to that of Aramac, after the station, when the survey was conducted in 1875. Recollections of an 1878 visit to Aramac were published in the Rockhampton Morning Bulletin in 1933, describing the township as consisting of "neat weatherboard structures, painted, and comprising four stores, three hotels, and three butchers' shops, with a post office, bank, court house, and surgery", and the surrounding countryside and as "one of the emporia of the West."

"The place is known to so many by name only that the visitor feels himself travelled. Moreover, he has become, acquainted, however slightly, with the great western country, of which we have all heard so much. "He has been on its threshold, having traversed the desert, and beheld, not without surprise, broad rolling downs stretching away to the horizon, with an open landscape, sparsely mottled with trees, the whole presenting a vivid contrast to the dense scrub and scanty herbage of some of the more easterly districts. He has, in a word, seen an oasis In the 'Sahara' -one which, to him, has a beginning, but is boundless on the western side. Besides this, if the visit has been made during Show week, he has come more, fully to appreciate the great pastoral interest, as represented in the persons of men of intelligence and energy -the pioneers of colonisation, the promoters of commerce."

Little is known about the original indigenous population, although there was a reported massacre of 25 local Aborigines at the nearby Mailman's Gorge. This event remained largely unknown until the publication of North Queensland Pioneers in 1932. An 1865 account said the death of a shepherd or a government employee at Stainburn Downs station, north-west of Aramac, led to a revenge attack by squatters. Three Europeans are supposed to have tracked 30 Aborigines to a cave at Mailman’s Gorge and shot them. Aramac State School opened on 21 January 1878. By 1901 the school was well established and received a very positive report from the School Inspector, Mr. Benbow, printed in The Western Champion.

"The discipline is kind, quietly firm, and sensible; the moral tone appears to be healthy; the school habits are very satisfactory; general behaviour is respectful and attentive; the class movements are quietly and effectively carried out, and very good order is maintained. Methods: The methods employed in teaching are generally intelligent and skillful; they are applied with skill and considerable energy; the amount of revision is sufficient. Progress: The progress made by the pupils may be regarded as good and sound. General condition: Everything considered the general condition of the school is highly satisfactory. Remarks: The two highest classes have been carefully and intelligently instructed, and the pupils of these classes have evidently been taught to think. The demeanor of the children during inspection was most pleasing."

Aramac was initially a major outback town. However, the railway line ran through Barcaldine to the south, taking away the trade. The local council built a spur line (tramway) from Barcaldine, which opened on 2 July 1913. The tramway operated until 31 December 1975. A tramway museum that opened in 1994, occupies the old goods sheds. 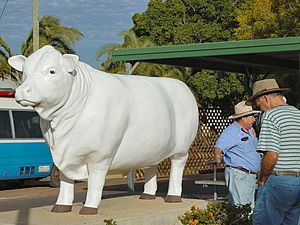 The white bull (pictured) was stolen by Henry 'Harry' Redford, otherwise known as Captain Starlight who duffed cattle from a property called Bowen Downs. The herd of cattle was driven overland to South Australia where some of the thieves were caught and tried. 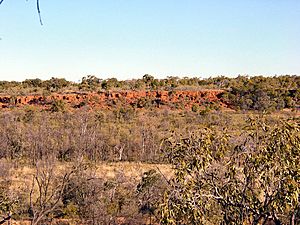 In 1914, Aramac developed thermal baths with its artesian water to promote itself as a health resort; however, it did not attract many invalids due to its isolated geographic location and the failure of the local government to promote the baths.

In 1924 a branch of the Country Women's Association was formed in Aramac, and by August that year were active, their efforts much appreciated in the town, and reported in the Western Champion. "Something new in entertainments was provided on Friday evening at the Shire Bail, when the Aramac branch of the Country Women's Association arranged a Euchre and Ping Pong tournament for us, with dance thrown in." 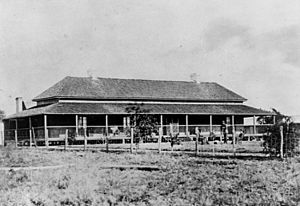 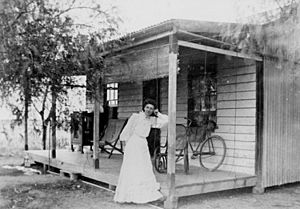 The teacher stands outside her residence in Aramac, ca. 1914 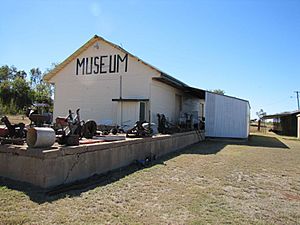 Aramac has a public library, visitor information centre, swimming pool located within the grounds of the Aramac Memorial Park in Gordon Street, a town hall, showground and a pub. There is no hospital, but nurse-led clinic facilities (Monday to Friday), ambulance services and 24-hours a day, seven days a week emergency on-call services. In 2016 the community had access to two doctors, with one staying overnight for two full days each week. The town is also serviced by the Royal Flying Doctor Service.

The annual Harry Redford Cattle Drive begins in Aramac and partly traces the 1870 footsteps of renowned cattle duffer Harry Redford, known as Captain Starlight, who walked 1,000 head of cattle from Bowen Downs, north of Aramac, to South Australia. In 2015 and 2016 the drive was cancelled due to prolonged drought in the region.

Aramac has a number of heritage-listed sites, including:

The Aramac War Memorial was officially unveiled in April 1924, at a well attended public ceremony. The Last Post was played by Mr. Affoo, and the children were all given a bag of lollies at the end of the ceremony. Shire Chairman, E.W. Bowyer presided and gave the speech, as the Governor was unable to attend.

This memorial was erected by the people of the Aramac Shire, as a modest tribute to the patriotism and loyalty of the men who enlisted to take part in the late deplorable European War. It will serve as as ineffaceable record to remind not only the rising generation but succeeding generations that Australians fought, bled, and died in the defence of their country.

All content from Kiddle encyclopedia articles (including the article images and facts) can be freely used under Attribution-ShareAlike license, unless stated otherwise. Cite this article:
Aramac, Queensland Facts for Kids. Kiddle Encyclopedia.