Longreach is a town in Central West Queensland, Australia approximately 700 kilometres (430 mi) from the coast, west of Rockhampton. The town is named after the "long reach" of the Thomson River on which it is situated. The town was gazetted in 1887, and the railway reached the town in 1892, causing the population to grow. It is the administrative centre of the Longreach Regional Council, which was established in 2008 as a merger of the former Longreach, Ilfracombe, and Isisford shires.

The town is on the Tropic of Capricorn. At the 2011 Australian Census Longreach recorded a population of 3,137. The main industries of the area are cattle, sheep, and, more recently, tourism.

A number of Queensland towns have their streets named to a theme. In Longreach, the streets are named after species of birds, with the streets running east-west named after water birds and those running north-south after land birds. The main business street is called Eagle Street. Other streets honour Hudson Fysh, an Australian aviation pioneer, and Sir James Walker, a farmer and long-serving mayor of the former Longreach Shire Council. 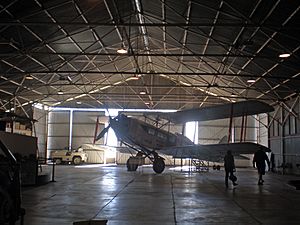 The world's second oldest airline, Qantas, commenced operating in Longreach - from this hangar - now part of the Qantas Founders Museum.

Longreach is also the home of the Australian Stockman's Hall of Fame, which was officially opened in 1988 by Queen Elizabeth II. The purpose of the centre is to showcase the history and the culture of life in rural Australia. Since its opening, over 1 million people have passed through its doors.

Longreach was one of the founding centres for Qantas, the Australian domestic and international airline. One of the airline's original hangars remains in use at the Longreach Airport and is listed on the Australian National Heritage List. The town is now the home of the Qantas Founders Outback Museum, which includes amongst its displays a decommissioned Qantas Boeing 747-200 aircraft, registration VH-EBQ, "The City of Bunbury." and Qantas's first jet aircraft VH-XBA (formerly VH-EBA), a Boeing 707, "The City of Canberra.". In recognition of the town's place in company history, as well as a play on the airliner's extended range, all of Qantas's Boeing 747-400s have "Longreach" printed on both sides of the first jetway entry/exit doors.

The town is home to the Australian Agricultural College's Longreach Campus, which prepares students for work in the agricultural and pastoral industries. It was known previously as the Longreach Pastoral College. The campus was opened in 1967. Adjacent to the college is the Longreach School of Distance Education, which provides lessons to remote students, formerly by HF radio but now using telephone lines.

In early April 2010, Longreach experienced a significant locust plague described by local residents as the worst in three decades.

Shopping facilities in the town include IGA, Foodworks and Prices Plus.

Longreach has a number of heritage-listed sites, including:

All content from Kiddle encyclopedia articles (including the article images and facts) can be freely used under Attribution-ShareAlike license, unless stated otherwise. Cite this article:
Longreach, Queensland Facts for Kids. Kiddle Encyclopedia.