Isisford is a small town and locality in the Longreach Region in Central West Queensland, Australia. At the 2011 census, Isisford and the surrounding area had a population of 262. This figure has never surpassed 300.

Isiford is located on the Barcoo River, and is approximately 120 kilometres (75 mi) south east of the town of Longreach. 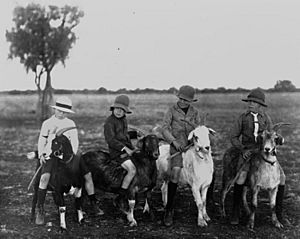 The first European in the area was the explorer Thomas Mitchell, who travelled through the area in 1846. Settlers followed and established a township in the 1870s. In the late 1870s, the town was named after a nearby ford on the Barcoo, and because the Isis Downs property was in proximity to it.

In 1878, the town was surveyed. A post office and telegraph line were operating by 1881. Isis Downs Post Office opened on 1 June 1868, was replaced by the Wittown office in 1876 which was renamed Isisford in 1878. In the following years the town progressed with the growth of the pastoral industry.

In September 1956, a deliberately lit fire at the Isisford Hotel resulted in the deaths of a mother and her child.

In the mid-1990s, the first fossils of Isisfordia, an extinct genus of crocodile-like animals, was discovered in a dry creek close to the town. The discovery was made by the town's former Deputy Mayor, Ian Duncan, after which the new species was named.

Isisford has a number of heritage-listed sites, including:

All content from Kiddle encyclopedia articles (including the article images and facts) can be freely used under Attribution-ShareAlike license, unless stated otherwise. Cite this article:
Isisford, Queensland Facts for Kids. Kiddle Encyclopedia.