Barcaldine ( locally) is a small town and locality in the Barcaldine Region in Central West Queensland, Australia. Barcaldine played a major role in the Australian labour movement. In the 2011 census, Barcaldine had a population of 1,655 people.

The streets in Barcaldine are named after different types of trees.

The town takes its name from a sheep station called Barcaldine Downs, which was established in 1863 by Donald Cameron, whose family property in Ayrshire, Scotland, which was named for Barcaldine, Argyll and Bute, Scotland. 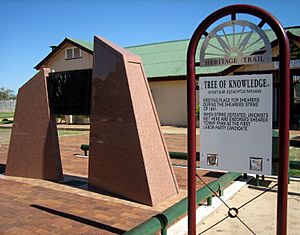 Tree of Knowledge marker in Barcaldine

Barcaldine played a significant role in the Australian labour movement and the birth of the Australian Labor Party. In 1891, it was one of the focal points of the 1891 Australian shearers' strike, with the Eureka Flag flying over the strike camp. The landmark Tree of Knowledge, under which the strikers met, stood outside the railway station. In 2006, persons unknown poisoned the tree with the herbicide Roundup, which led to its demise.

One of the first May day marches in the world took place during the strike on 1 May 1891 in Barcaldine. The Sydney Morning Herald reported that of the 1,340 men that took part, 618 were mounted on horses. Banners carried included those of the Australian Labor Federation, the Shearers' and Carriers' Unions, and one inscribed 'Young Australia'. The leaders wore blue sashes and the Eureka Flag was carried. The Labor Bulletin reported that cheers were given for "the Union", "the Eight-hour day", "the Strike Committee" and "the boys in gaol". It reported the march:

In the procession every civilised country was represented doing duty for the Russian, Swede, French, Dane etc., who are germane to him in other climes, showing that Labor's cause is one the world over, foreshadowing the time when the swords shall be turned into ploughshares and Liberty, Peace and Friendship will knit together the nations of the earth. 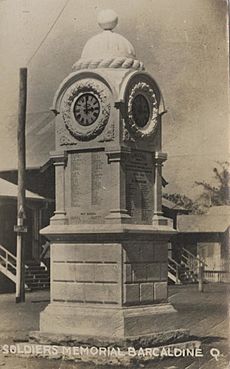 In 1892, the local government area of Barcaldine Division was established, by separating it from the Kargoolnah Division which had its headquarters in Blackall. Since then, Barcaldine has been the headquarters of local government in the area, commencing with the Barcaldine Divisional Board, which became the Barcaldine Shire Council in 1903, and then the Barcaldine Regional Council in 2008. The initial local government meetings were held in a building in Oak Street, which burned down in 1896. A shire hall was then constructed in 1898 on the south-east corner of Ash and Beech Streets, which eventually became too small. In February 1912 a new larger shire hall was opened and that building (somewhat modified and extended) is still in use today and is heritage-listed.

The artesian water at Barcaldine is full of minerals. A bore had been constructed in 1887, but was unsuitable for the water needs of the steam locomotives and so the water was let run to waste. By 1891, a local doctor observed that water contained soda and potash which he believed would have health benefits. In 1907, a swimming pool using the artesian water was built by the Barcaldine Shire Council, along with baths and showers for therapeutic use. Although Barcaldine was being promoted as a spa town into the mid 1930s, interest in "taking the waters" declined after that period as medical opinion became increasingly doubtful of the benefits of mineral waters, favouring drugs and physiotherapy as better treatments.

The Barcaldine War Memorial was unveiled by Queensland Governor, Matthew Nathan, on 21 May 1924. 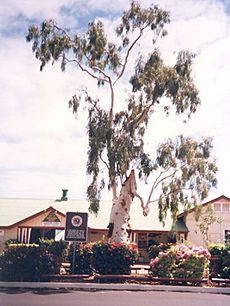 Barcaldine has a public library, bowls, tennis clubs, a combined racecourse and showground near the golf course, a historical and folk museum, swimming pool and visitor information centre. 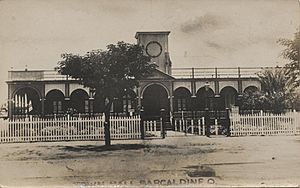 Shire Hall at Barcaldine, circa 1920 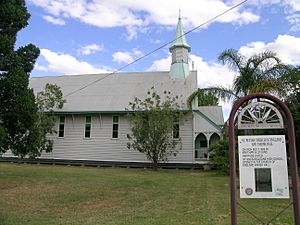 Barcaldine has a number of heritage-listed sites, including:

All content from Kiddle encyclopedia articles (including the article images and facts) can be freely used under Attribution-ShareAlike license, unless stated otherwise. Cite this article:
Barcaldine, Queensland Facts for Kids. Kiddle Encyclopedia.