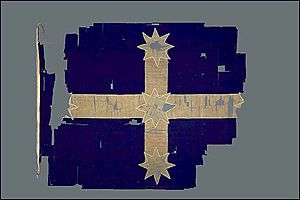 The Eureka Flag fragments held by the Art Gallery of Ballarat.

The Eureka Flag was flown at the battle of the Eureka Stockade, which took place on 3 December 1854 at Ballarat in Victoria, Australia. An estimated crowd of over 10,000 demonstrators swore allegiance to the flag as a symbol of defiance at Bakery Hill on 29 November 1854. Twenty-two miners were officially listed as killed at the Eureka Stockade, along with seven troopers and police. Around 120 miners were arrested and many others badly wounded.

The field is Prussian blue measuring 260 cm × 400 cm (2:3.08 ratio) and made from fine woollen fabric. The horizontal arm of the cross is 37 cm tall and the vertical arm is 36 cm wide. The central star is slightly larger (8.5%) than the others being about 65 cm tall from point to point and the other stars 60 cm. The white stars are made from fine cotton lawn and the off-white cross from cotton twill.

The flag is listed as an object of significance on the Victorian Heritage Register and was designated as a Victorian icon by the National Trust of Australia in 2006. It is part of the collection of the Art Gallery of Ballarat, which is responsible for its care and conservation and is on long-term loan to the Eureka Centre Ballarat, where it is on public display.

The disputed first report of the attack on the Eureka Stockade also makes reference to a Union Jack being flown during the battle that was then captured, along with the Eureka Flag, by the foot police.

All content from Kiddle encyclopedia articles (including the article images and facts) can be freely used under Attribution-ShareAlike license, unless stated otherwise. Cite this article:
Eureka Flag Facts for Kids. Kiddle Encyclopedia.