Peter Lalor (February 5, 1827 – February 9, 1889) was the leader of the Eureka Stockade rebellion, one of Australia's few violent protests and seen by many as the start of democracy in Australia. He later became an important politician in Victoria.

With political unrest in Ireland, and the chance of getting rich in on the Australian goldfields, he left Ireland with his brother, Richard, and went to Victoria, Australia, in 1852. They worked on building the railway between Melbourne and Geelong. In 1853 Peter went to the Ovens River looking for gold, and Richard went back to Ireland where he later became a member of parliament. Peter Lalor went into business selling wine and tobacco in Melbourne, but decided to go to Ballarat to look for gold in 1854. He set up camp on the Eureka Lead, at East Ballarat, which was settled by many miners from Ireland.

Lalor was born at Tenakill, Queens County, Ireland into a large family, active in Irish politics. His father Patrick, represented Queens County in the House of Commons. Peter was educated in Dublin and became a civil engineer.

Three of the Lalor brothers migrated to America and fought on both sides of the Civil War. However, Peter and his brother Richard decided to go to Australia, arriving in Victoria in October 1852.

Lalor worked first in the construction of the Melbourne–Geelong railway line, but resigned to take part in the Victorian Gold Rush. He began mining in the Ovens diggings (Beechworth), then moved to the Eureka Lead at Ballarat where he befriended Duncan Gillies (who later became Premier of Victoria). His brother Richard returned to Ireland, becoming politically active and himself a member of the House of Commons.

In 1854 the miners were working in the goldfields (the area where gold was being found) became very angry about the cost of a gold mining license. In Ballarat the miners started the Ballarat Reform League and demanded changes to the laws. Lalor was the chairman of the Reform League. After on particularly brutal hunt for licenses on November 30, 1854, the miners met together at Bakery Hill to demand the League do something to protect them from the police violence. None of the usual speakers were at the meeting, so Lalor stepped forward and gave a rousing speech. The rebel miners flew their new Eureka Flag.

He made the miners promise to protect each other, and their rights and liberties. He told the miners to get weapons and be ready in case they were attacked by the police and government troops. Lalor became the new leader of the League. They built a small fort, or stockade, at Eureka in east Ballarat. This fort, the Eureka Stockade was attacked by 275 government soldiers at 3:00am on December 3, 1854. Twenty-two miners were killed, and Lalor was badly hurt. Friends hid him from the soldiers and he was able to get away. His left arm had to be amputated.

After Eureka, Lalor was hidden in Geelong until the police and eager bounty hunters concluded looking for him. The government changed the laws, and miners on the goldfields were able to elect people to Parliament. Lalor was elected in November 1855. As part of the democratic changes, Victoria got a constitution in 1856 and Lalor was elected to the new Parliament. His political views were not as democratic as the Ballarat miners wanted. He was against giving every one the right to vote and he wanted some people in the parliament to be appointed, not elected. Lalor became the person in charge of several mining companies. He even supported wage cuts for miners working in his mines. He was seen as more interested in money and power than in people's rights. In 1859 he changed his seat in parliament to another area, and did not represent the Ballarat miners again.

In January 1871 Lalor lost his seat in an election. He was made Chairman of the Clunes Water Commission with the job of getting water for the town of Clunes. He was voted back into parliament again in 1874. In 1875 he became Postmaster General (in charge of the postal service) and later Commissioner for Trade and Customs. From 1880 to 1887 he was Speaker of the Legislative Assembly. Lalor's wife and daughter died in 1887, he was also sick with diabetes, so he stopped being Speaker, but stayed as representative for South Grant until his death.

Lalor House, Joseph Lalor's medical rooms & home in Richmond, is where Peter Lalor spent his later years until his death.

Alicia Lalor died on 17 May 1887 at the age of 55 years. Following her death, Peter Lalor took leave from Parliament and visited San Francisco, California.

Lalor died on Saturday, 9 February 1889 at age 62 at his son's home in Richmond and was buried at the Melbourne General Cemetery. 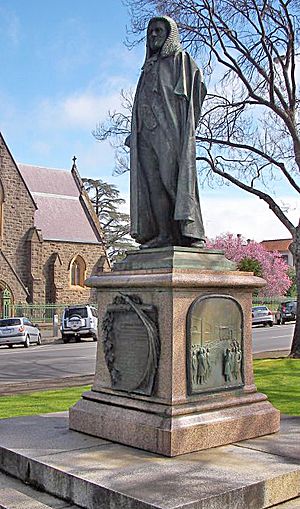 A statue of Peter Lalor was erected at Sturt Street in Ballarat in 1893. It was presented to the municipality by a friend of Lalor's, James Oddie, who was also first Chairman of the city, and was unveiled by another friend, the Premier, the Hon. Duncan Gillies.

The Melbourne suburb of Lalor, Victoria, was named after him in 1945. The suburb was originally pronounced "LAW-luh", after Peter Lalor, and although many people still pronounce it as such, in recent times the pronunciation "LAY-lor" has become predominant.

A federal electorate in the south-western suburbs of Melbourne, the Division of Lalor, was named after him in 1948. It has been held successively by senior Labor figures Reg Pollard, Jim Cairns, Barry Jones and Julia Gillard. The suburb of Lalor is not in the electorate, which is pronounced "LAW-luh".

Lalor Street in Ballarat East was also named in his honour.

The University of Ballarat (now known as Federation University Australia) honoured him by naming one of the two Mt Helen campus' Halls of Residence after him (the other being named after Bella Guerin, the first woman to graduate from an Australian university).

Portrayals of Lalor's role in the Eureka Rebellion appear in film.
The first film to have Lalor appear in is supposed to be Eureka Stockade (1907 film), but only a seven-minute fragment thereof has survived. In 1915, Lalor was portrayed by Leslie Victor in the silent film The Loyal Rebel—this film is also considered lost. Next, he was played by Chips Rafferty in the 1949 British film Eureka Stockade (released in United States of America under the title, Massacre Hill.) He was played by Australian actor Bryan Brown in Eureka Stockade, a two-part television mini-series which aired on the Seven Network in 1984. The last film to date to picture Lalor was the Australian documentary Riot or Revolution: Eureka Stockade 1854 from 2006, with Lalor played by Andrew Larkins.

Lalor has also been depicted in the commemorative Son et lumière "Blood Under the Southern Cross" at Sovereign Hill since 1992.

A caricature bollard by artist Jan Mitchell depicting Peter Lalor holding the Eureka flag was erected on the Geelong foreshore in 1999 as part of the Waterfront Geelong bollard walk.

His portrait is featured on two commemorative postage stamps, a 38c Ireland stamp released on 3 May 2001 in the "Rebel Spirit, Irish Heritage of Australia" series and a 2004 AUD2.45 Australian stamp commemorating the Eureka Stockade.

All content from Kiddle encyclopedia articles (including the article images and facts) can be freely used under Attribution-ShareAlike license, unless stated otherwise. Cite this article:
Peter Lalor Facts for Kids. Kiddle Encyclopedia.