The Sturt Street Gardens is a central reservation running along Sturt Street, one of the main thoroughfares of Ballarat, (Victoria, Australia). The formal gardens span 13 city blocks from Grenville Street in the east to Pleasant Street in the west, are 20 metres (22 yd) wide and cover an area of 2.87 hectares (7.1 acres) running east–west.

Several blocks along the gardens have individual names based on their history and features such as Queen Victoria Square and Alexandra Square.

Sturt Street, the main boulevarde of Ballarat, was created by the first survey of the town in 1851 by WS Urquhart. In the 1860s a dual carriageway with central median strip was created. 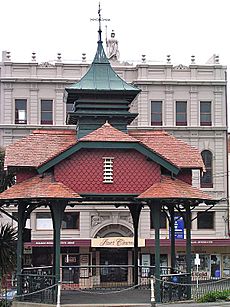 The SS Titanic Memorial Bandstand is an excellent and unusual example of creative bandstand design of the Edwardian period, a picturesque composition with dominant roofs of oriental character, it is an exotic and important element of the streetscape of Sturt Street.

Constructed in 1915, it is one of the few remaining examples of what was once a building type found commonly in the parks and gardens of many municipalities. It serves as a tangible reminder of a highly popular form of entertainment, prominent on the community agenda for many years. The construction of the bandstand and its survival until now also reflects the place of music in Ballarat's cultural identity and the continuing prominence of music in the community.

It is a memorial to the sinking of the RMS Titanic, a disaster still recalled today, and principally to her heroic musicians who played as they went down with their ship.

The bandstand and its construction is indicative of Ballarat's self-image and patriotic fervour.

The Alexandra Bandstand is a typical and well resolved example of creative bandstand design; it polygonal form surmounted by a 'Moorish' onion dome is representative of bandstands of this period. The bandstand has particularly fine wrought iron detailing incorporating musical motifs and is an important and exotic element of the streetscape of Sturt Street.

Built in 1908 during the heyday of the band movement, it is now one of the few remaining examples of bandstands in Victoria. It serves as a tangible reminder of a highly popular form of entertainment, prominent on the community agenda for many years. The construction of the bandstand and its survival until now also reflects the prominence of music in Ballarat's cultural and civic identity.

The City of Ballarat has a walk of the statues within the Sturt Street Gardens.

The main statues in order from West to East are:

All content from Kiddle encyclopedia articles (including the article images and facts) can be freely used under Attribution-ShareAlike license, unless stated otherwise. Cite this article:
Sturt Street Gardens Facts for Kids. Kiddle Encyclopedia.