The Australian gold rush was a large number of gold discoveries in Australia. During those gold rushes, significant numbers of workers (both from other areas within Australia and from overseas) relocated to areas in which gold had been discovered. A number of gold finds occurred in Australia prior to 1851, but only the gold found from 1851 onwards created gold rushes. This is mainly because, prior to 1851, the colonial government of New South Wales (Victoria did not become a separate colony until 1 July 1851) had suppressed news of gold finds which it believed would reduce the workforce and destabilise the economy.

After the California Gold Rush began in 1848, which caused many people to leave Australia for California to look for gold there, the New South Wales government rethought its position, and sought approval from the Colonial Office in England to allow the exploitation of the mineral resources and also offered rewards for the finding of payable gold. 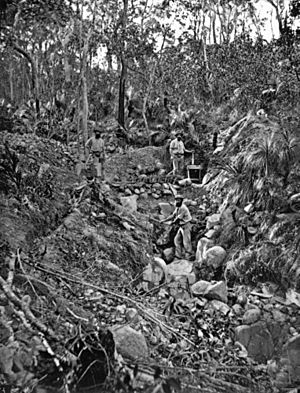 Looking for gold in Queensland,1870

Thousands of people came to Australia in the hope of finding a lot of gold and becoming rich. The first rush started in 1851 when gold was found near Bathurst, New South Wales and ended with the last rush in 1893 to Kalgoorlie, Western Australia. At each place gold was easily found in rivers and creeks. This was known as alluvial gold and could be found by individual miners using very basic equipment such as a spade and a dish. In most places this alluvial gold was taken in the first few months. To get at the gold that was buried deeper in the ground meant that miners needed to work together and dig tunnels. Eventually large companies were started to raise money so that deep gold mines could be built.

The gold rushes happened when alluvial gold was found. Miners would quickly move there in the hope of being the first to find the surface gold. For example, miners rushing to Clunes, Victoria in August 1851, quickly changed their minds and went to Buninyong when they heard of a new gold discovery. Weeks later gold was found at Ballarat a few miles to the north and within six weeks there were more than 10,000 people digging. But by 1852 most miners had left Ballarat and rushed to the new goldfields at Bendigo. In 1854, miners in Ballarat were angry and upset at paying for gold licences. They burned their licences and raised the Eureka Stockade flag in protest. The miners fought soldiers and police officers to protect their rights. This was called the Eureka Stockade. Many people died, but afterwards the miners didn't have to pay for their licences anymore.

Before the gold rush

Gold had been found in Australia before the 1851 gold rush. At first people would not believe the stories. A convict who found gold near Bathurst in 1823 was given 150 lashes with a whip as it was believed he must have stolen it. The explorer Count Paul Strzelecki found gold in the Australian Alps in 1839. The government kept it a secret as they did not want to lose control of the convicts if they went rushing off to search for gold. Gold was also found at:

The first gold rush was in New South Wales. There were many others during the next 30 years. 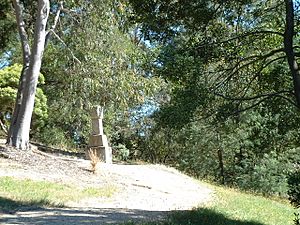 Gold rushes in the Northern Territory

All content from Kiddle encyclopedia articles (including the article images and facts) can be freely used under Attribution-ShareAlike license, unless stated otherwise. Cite this article:
Australian gold rush Facts for Kids. Kiddle Encyclopedia.