The Palmer River is a river located in Far North Queensland, Australia. The area surrounding the river was the site of a gold rush in the late 19th century which started in 1873.

The headwaters of the Palmer River rise in the Sussex Range, part of the Great Dividing Range southwest of Cooktown. The river is formed by the confluence of the Prospect Creek and Campbell Creek, near Palmer River Roadhouse, south of Lakeland. The Palmer River flows west across the Cape York Peninsula towards the Gulf of Carpentaria joined by 29 tributaries including the South Palmer River, Little Palmer River and North Palmer River, before reaching its confluence with the Mitchell River northeast of Staaten River National Park. The river descends 365 metres (1,198 ft) over its 327-kilometre (203 mi) course and has a catchment area of 8,335 square kilometres (3,218 sq mi).

Yalanji (also known as Kuku Yalanji, Kuku Yalaja, Kuku Yelandji, and Gugu Yalanji) is an Australian Aboriginal language of Far North Queensland. The traditional language region is Mossman River in the south to the Annan River in the north, bordered by the Pacific Ocean in the east and extending inland to west of Mount Mulgrave. This includes the local government boundaries of the Shire of Douglas, the Shire of Cook and the Aboriginal Shire of Wujal Wujal and the towns and localities of Cooktown, Mossman, Daintree, Cape Tribulation and Wujal Wujal. It includes the head of the Palmer River, the Bloomfield River, China Camp, Maytown, and Palmerville. 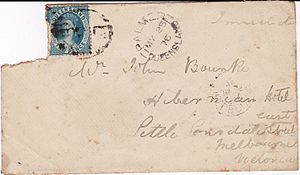 The earliest known letter from the goldfield

Palmer River was one of Australia's major gold rush locations. William Hann and geologist Norman Taylor found gold in a sandy bed of the river in 1872. Hann named the river after Arthur Hunter Palmer the Premier of Queensland at that time.

The main settlement of the gold field was Maytown replacing Palmerville after some months. The settlement began as a camp in 1873, then grew into a town which served as the administration centre for the former Hann Local Government Area. The settlements of Byerstown and Idatown were also established along the river.

There were several confrontations between the settlers and the Aborigines from the area, including one at Battle Camp.

The miners in the Palmer River included Chinese, mostly from the Guangdong Province in southern China. The Chinese miners would re-work the diggings of Europeans as they moved on to find richer diggings. In 1876, with the rush to the Hodgkinson River, Chinese miners occupied most of the Palmer Gold Field. As gold reserves were extracted, anti-Chinese sentiment grew.

Although most of the surface gold has long since been prospected, there remain a handful of deeper mine projects in the area.

All content from Kiddle encyclopedia articles (including the article images and facts) can be freely used under Attribution-ShareAlike license, unless stated otherwise. Cite this article:
Palmer River Facts for Kids. Kiddle Encyclopedia.