The Mitchell River is a river located in Far North Queensland, Australia. The river rises on the Atherton Tableland about 50 kilometres (31 mi) northwest of Cairns and flows about 750 kilometres (470 mi) northwest across Cape York Peninsula from Mareeba to the Gulf of Carpentaria.

It was named by Ludwig Leichhardt on the 16 June 1845 after Sir Thomas Mitchell while he was on his overland expedition from Moreton Bay to Port Essington. It may have been previously named the Vereenighde River in 1623 by a Dutch merchant and navigator, Jan Carstensz. 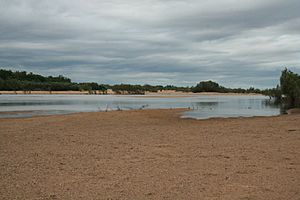 The Mitchell River and its tributaries have for a long time carved their way westwards through the rugged, weathered highlands of the Great Dividing Range, carrying away sediments to be deposited in the broad floodplains and wetlands of the Gulf Savannah country.

The rivers' waters 'pulse' annually with monsoonal rains, seasonally collecting water from across the local tropical rainforests in the highlands to the east; the wet sclerophyll forests in the central uplands; a variety of woodlands plus savannah in the western plains; annually flooding with freshwater, the tidal plains, wetlands, estuaries, and mangroves of the lower Mitchell and coastal plains.

Protected areas within the Mitchell River catchment include the Hann Tableland, Mitchell-Alice Rivers, Chillagoe-Mungana Caves, part of Bulleringa to the south, and most of the Forty Mile Scrub national parks. 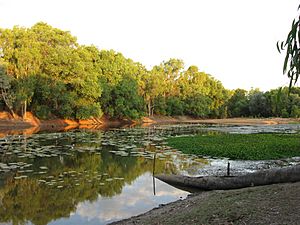 Being a large river system, the Mitchell River may contain within its catchment one of Australia's most ecologically diverse aquatic systems consisting of a rich variety of both wet and dry tropical monsoonal habitats.

The catchment ecology as a whole has been generally described as follows:

The vegetation in the Mitchell River Catchment area ranges from the World Heritage Wet Tropic rainforest on the eastern highlands to the open savannah on the western and lower Mitchell plains. The extensive mangroves and lagoon systems at the delta of the Mitchell River are recognised worldwide. The permanent waters in the upper catchment are associated with springs and water holes..

More specifically, while this ecologically diverse river system is relatively poorly studied, it is known to contain at least 18 rare, endangered or vulnerable animal species including the golden-shouldered parrot, the Gouldian finch and the northern bettong. The mouth of the river lies in the Gulf Plains Important Bird Area.

The major towns in the river's catchment are Kowanyama, Chillagoe, Dimbulah, Mount Carbine, Mount Molloy. Other smaller towns in the Mitchell River catchment include Mutchilba and Almaden.

Kunjen (also known as Koko Wanggara, Ngundjan and Olkola) is a language of Western Cape York. The Kunjen language region includes the landscape within the local government boundaries of Kowanyama Community Council and Cook Shire Council.

Yir Yiront (also known as Yiront, Jirjoront, Yir-yiront, and Kokomindjan) is an Australian Aboriginal language. Its traditional language region is in Western Cape York within the local government areas of Aboriginal Shire of Kowanyama and Shire of Cook, in the catchments of the Coleman River and Mitchell River. Following the removal of Aboriginal people from their traditional lands, it is also spoken in Pormpuraaw and Kowanyama.

All content from Kiddle encyclopedia articles (including the article images and facts) can be freely used under Attribution-ShareAlike license, unless stated otherwise. Cite this article:
Mitchell River (Queensland) Facts for Kids. Kiddle Encyclopedia.