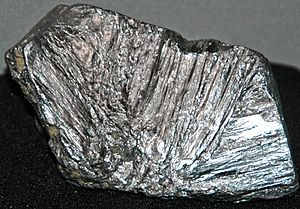 Molybdenite from Wolfram Camp near Dimbulah

Dimbulah is a town and locality in Far North Queensland, Australia, 114 kilometres (71 mi) from Cairns by road, on the Atherton Tableland. It is within the local government area of Shire of Mareeba (between 2008 and 2013, it was within the Tablelands Region). At the 2016 census, Dimbulah had a population of 1,050.

The former mining town of Wolfram is located in the north-west of the locality. There are historical ruins of early mining there as well as a present-day open cut mine.

The town was established in 1876 to service the Tyrconnell Gold Mine, one of the richest mines on the Hodgkinson Gold Fields. The name "Dimbulah" is thought to have come from the local Indigenous Australian word for "long waterhole", referring to the Walsh River that runs nearby the town. Dimboola Post Office opened by 1900 and was renamed Dimbulah in 1904.

The area around Dimbulah was originally home to the Djankun and Kuku Djungan tribe. During the 1920s the Queensland government forcibly removed most of their children, forcing the tribe to scatter.

In the early 1900s the area received an influx of Italian migrants and in 1928 tobacco was introduced, becoming the area's major industry soon after. At its peak, there were 800 growers in the area, producing over 8,000 tonnes (60% of national yield) of tobacco a year. 'The Way Back In' is an Australian heritage project that documents a small selection of Australian heritage within the Italian communities in Dimbulah, Innisfail and Cairns.

Important local events include the annual Lion's Festival and the Great Wheelbarrow Race both held annually in May. On 27 September 2014, the Dimbulah P-10 State School celebrated its centenary.

Dimbulah has a number of sites listed on the Queensland Heritage Register including:

Tobacco remained the dominant crop until recent years when government policy compelled its demise. Recent attempts at alternative crops such as tea trees, mangoes, sugar cane, coffee, lemons, limes, avocados, papaws, papayas, peanuts, soya beans, lychees, grapes and cash crops (pumpkins, melons, etc.) have met with mixed success. Farming is a significant employment option in Dimbulah and many travelers, including backpackers, are employed as short-term farm labourers, particularly during the busy mango harvest from November to January. Holders of a working holiday visa may be eligible for an extension to their visa after a period of work on farms in the area. Accommodation is available at the town's caravan park or the Junction Hotel. If employed on a farm, accommodation is often available in small 'dongas' or barracks. Public transport from Cairns is possible, although infrequent, on Trans North's bus service which stops at Mareeba, 45 kilometres (28 mi) from Dimbulah. The Savannahlander tourist train stops in Dimbulah as well but does not operate year-round.

All content from Kiddle encyclopedia articles (including the article images and facts) can be freely used under Attribution-ShareAlike license, unless stated otherwise. Cite this article:
Dimbulah, Queensland Facts for Kids. Kiddle Encyclopedia.