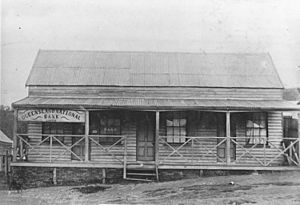 Thornborough is a rural town and locality in the Shire of Mareeba, Queensland, Australia. In the 2016 census the locality of Thornborough had a population of 9 people.

It rose to prominence in the 1870s as a gold mining town in the Hodgkinson Minerals Area. Today, there are very few buildings remaining in the town.

The town of Kingsborough, another former mining town, is located to the north-east of the town of Thornborough.

Thornborough was named in 1876 after George Henry Thorn, the then Queensland Premier.

By May 1877, the streets were laid out and named after pioneers of north Queensland, such as James Venture Mulligan and William (Billy) McLeod and Muirson.

Thorborough has a number of heritage-listed sites, including:

All content from Kiddle encyclopedia articles (including the article images and facts) can be freely used under Attribution-ShareAlike license, unless stated otherwise. Cite this article:
Thornborough, Queensland Facts for Kids. Kiddle Encyclopedia.