General Grant Mine facts for kids

General Grant Mine is a heritage-listed mine off Dimbulah - Mount Mulligan Road, Kingsborough, Shire of Mareeba, Queensland, Australia. It was built from c. 1878 to the 1930s. It was added to the Queensland Heritage Register on 21 October 1992.

The Hodgkinson Goldfield was proclaimed on 15 June 1876. Although the Hodgkinson was geologically similar to the great alluvial gold field to the north, the Palmer, it was predominantly a reefing field with its major mines in the vicinity of the now abandoned townships of Kingsborough, Thornborough and Northcote. It was a neglected field through lack of capital, and although there was an optimistic outlook until the first decade of the twentieth century, it was clear by 1908 that its small yield no longer justified separate goldfield administration and accordingly, in 1909 it was incorporated into the Chillagoe Gold and Mineral field.

The revival was unexpected, but the opening of the Tablelands railway from Cairns to Mareeba in 1893 had made the field more accessible and increased use of cyanding promised improved returns for reefing fields. The real impetus came in 1897 when the British group, the Cecil Syndicate focused on the General Grant mine.

Intermittent working resulted in the shaft reaching the 229-metre (751 ft) level by 1937 when it was owned by the Hodgkinson Gold Development Syndicate Limited. The reef was under consideration for dewatering and re-opening in late 1944, when it was thought that at least 8,000 long tons (8,100 t) of ore, with an average grade of 0.4 ounces (11 g) gold, remained and although the grade is said to have improved at the bottom of the workings, it was not economical. Several small prospecting efforts have been carried out since. 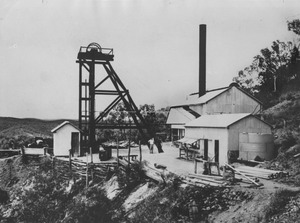 General Grant Mine at Kingsborough, 1937

The place includes a large winding shed, workshop, and two mine shafts situated on a terrace, set high on a steep hillside. Extensive mullock dumps extend from both shafts to the base of the hill. The collar of the main shaft has caved and is strewn with the timbers of a recently collapsed headframe.

The winding shed is constructed of heavy round timber uprights supporting a sawn timber frame. The building and adjacent workshop are corrugated iron clad. The building contains a winding engine, an intact Babcock boiler in a brick mount, a compressor and an air receiver. The Babcock & Wilcox boiler is equipped with a high steel chimney. A second shaft and an adit are located about 70 metres (230 ft) north-west with two colonial boilers.

General Grant Mine was listed on the Queensland Heritage Register on 21 October 1992 having satisfied the following criteria.

The General Grant Mine is significant in Queensland's history because it was a major producer of reef gold on the Hodgkinson field between 1878 and 1910.

In addition, the winding shed is one of two surviving in North Queensland housing an intact range of early winding plant. (The other is located at the Great Northern Mine, Herberton) The Walkers winding engine is one of the most intact examples surveyed, while the Schran air compressor is rare. The Babcock and Wilcox boiler in its brick housing is the only intact example surviving in the Mareeba Mining District.

Isolation and difficult access has ensured the survival in situ of this representative and now rare mine haulage plant.

All content from Kiddle encyclopedia articles (including the article images and facts) can be freely used under Attribution-ShareAlike license, unless stated otherwise. Cite this article:
General Grant Mine Facts for Kids. Kiddle Encyclopedia.