Chillagoe is a rural town and locality in the Shire of Mareeba, Queensland, Australia. In the 2016 census the locality of Chillagoe had a population of 251 people.

It was once a thriving mining town for a range of minerals, but is now reduced to a small zinc mine and some marble quarries.

It has been stated by leading geologist Professor Ian Plimer that the Chillagoe region has the most diverse geology in the world.

Chillagoe was named by William Atherton in 1888. The name is taken from the refrain of a sea shanty: "Hikey, Tikey, Psyche, Crikey, Chillagoe, Walabadorie". James Mulligan had explored the area in 1873 and Atherton backed up his reports of rich copper outcrops in the area. Mining pioneer John Moffat sent prospectors to the field in 1888 and quickly monopolised the field. A receiving office opened in 1891 (with W. Atherton as Receiving Office Keeper) but closed in 1893. A post office opened in 1900 with F. Donner as the storekeeper and postmaster. The Chillagoe Railway and Mining Company's line opened from Mareeba in 1901 and a Town Reserve was proclaimed 27 October 1910. 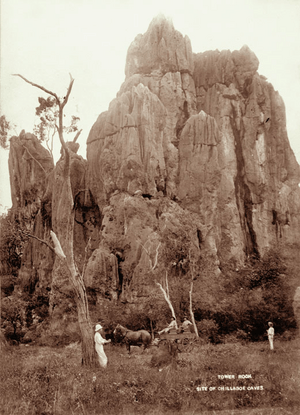 A horse and carriage at Tower Rock in 1897

Chillagoe is sometimes remembered for its involvement in the Mungana affair, a mining scandal which brought down the government. In 1919, after fluctuating fortunes and closures, ownership of the smelter was transferred to the Queensland Government. This acquisition by the Labor Government brought allegations of political corruption which persisted for many years. Closures plagued the smelter again in the late 1920s. When the Australian Labor Party lost power in 1929, the new government ordered a Royal Commission into the incident. The political careers of two former Queensland Premiers, 'Red' Ted Theodore and William McCormack, were ruined by the Commission’s report. Read the famous book by Frank Hardy: "Power without Glory". 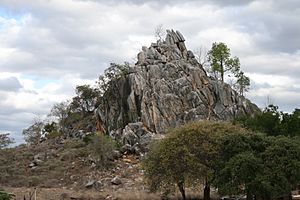 Chillagoe has a number of heritage-listed sites, including:

Woothakata is a property on beautiful Chillagoe creek named after the early Tableland shire which Chillagoe was a part of. Woothakata is an Aboriginal word which describes the way Aborigines traveled to Ngarrabullgan/Mount Mulligan, an important meeting place.

The heritage-listed Chillagoe smelters, the cemetery and the many old mines attract history buffs to the area.

There are no nearby secondary schools. Distance education or boarding schools are the options.

Chillagoe was once the terminus of the Mareeba-to-Chillagoe railway line. That line has closed, leaving the following abandoned stations:

All content from Kiddle encyclopedia articles (including the article images and facts) can be freely used under Attribution-ShareAlike license, unless stated otherwise. Cite this article:
Chillagoe, Queensland Facts for Kids. Kiddle Encyclopedia.