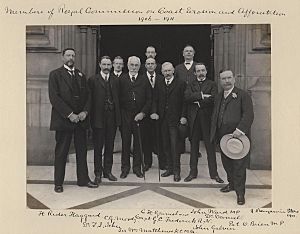 Members of the Royal Commission on Coast Erosion and Afforestation, 1906-1911 by Sir (John) Benjamin Stone

In states that are Commonwealth Realms a Royal Commission is a major government public inquiry into an important issue. They have been held in the United Kingdom, Canada, Australia, New Zealand, Kenya and Saudi Arabia. In Hong Kong, Ireland and South Africa, they are called a Commission of Enquiry or Commission of Inquiry.

A Royal Commissioner has a lot of power, more than those of a judge but these are limited to the "Terms of Reference" of the Commission. The Commission is created by the Head of State (the Sovereign, or his/her representative in the form of a Governor-General or Governor) on the advice of the Government. In practice–unlike other forms of inquiry–once a Commission has started the government cannot stop it. Because of this governments are usually very careful about framing the Terms of Reference and generally include in them a date by which the commission must finish.

Royal Commissions are called to look into very important matters and usually controversy. For example, these can be about government structure, the treatment of minorities, or the events that had received concern from the public or economic questions.

Many Royal Commissions last many years and, often, a different government is left to respond to the findings. In Australia–and particularly New South Wales–Royal Commissions have been investigations into police and government corruption and organised crime. They have used the powers of the Royal Commissioner to force powerful, but corrupt, public officials to tell the truth.

Royal Commissions are usually run by one or more notable figures. Because of their legal powers the Commissioners are often retired senior judges.

Royal Commissions usually research issues, consult with experts both within and outside of government and the public as well. They can call witnesses under oath, offer indemnities, seize documents and other evidence (sometimes including those normally protected, such as classified information), holding hearings in camera, and can force all government officials to help the Commission.

The results of Royal Commissions are published in, often, massive reports of findings containing policy recommendations. They often have long and complex names, for example, the "Royal commission into whether there has been corrupt or criminal conduct by any Western Australian Police Officer". Because of this they are commonly known by the name of the main Commissioner. These reports are often quite important, with the government making some or all recommendations into law. The work of some Commissions have been almost completely ignored by the government. In other cases, where the Commissioner has not kept to the terms of reference, the commission has been stopped by a superior court.

All content from Kiddle encyclopedia articles (including the article images and facts) can be freely used under Attribution-ShareAlike license, unless stated otherwise. Cite this article:
Royal Commission Facts for Kids. Kiddle Encyclopedia.