Kuranda is a rural town and locality on the Atherton Tableland in the Shire of Mareeba, Queensland, Australia. In the 2016 census, Kuranda had a population of 3,008 people. It is 25 kilometres (16 mi) from Cairns, via the Kuranda Range road. It is surrounded by tropical rainforest and adjacent to the Wet Tropics of Queensland World Heritage listed Barron Gorge National Park.

Kuranda is positioned on the eastern edge of the Atherton Tableland where the Barron River begins a steep descent to its coastal floodplain. The area is an important wildlife corridor between the Daintree/Carbine Tableland area in the north and Lamb Range/Atherton Tableland in the south, two centres of biodiversity.

Parts of Kuranda, particularly along its eastern edge, are protected within the Kuranda National Park and Barron Gorge National Park. Both national parks belong to the Wet Tropics World Heritage Area. Barron Gorge Forest Reserve and Formatine Forest Reserve have been established in the south of Kuranda. Closer to the centre of the town is Jumrum Creek Conservation Park where a near threatened, endemic frog species is protected. An elongated dam created by a weir built for a power station was constructed in 1935 and is used to today for recreation. 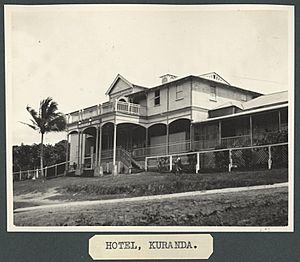 The rainforest around Kuranda has been home to the Djabugay people for over 10,000 years. Europeans began to explore the area throughout the nineteenth century. It is believed a massacre of indigenous people took place at the location in Kuranda known as Skeleton Creek. Kuranda was first settled in 1885 and surveyed by Thomas Behan in 1888. Construction of the railway from Cairns to Myola (later Cairns to Herberton) began in 1887 and the line reached Kuranda in 1891. The current railway station was built in 1915.

Kuranda Post Office opened on 25 June 1891 (a Middle Crossing receiving office had been open from 1888). Between 1912 and 1913 Eric Mjöberg lead an expedition to Queensland in which the Kuranda Aboriginal people were observed.

Although coffee was grown around Kuranda in the early twentieth century, timber was the town's primary industry for a number of years. Kuranda has been known as a tourist destination since the early 1900s. It was both the rainforest and local Aboriginals which attracted people to the area. Today Kuranda is a 'village in the rainforest' with tourism being the current backbone of the local economy. The 'village in the rainforest' concept promoted from the 1970s onwards served two purposes. It attracted those seeking a bohemian enclave in which to reside as well as a being a tourist promotional strategy. Throughout the 1970s and 1980s Kuranda was popular with alternative lifestylers, a theme that still runs through the local community today.

The Barron Gorge Hydroelectric Power Station was built nearby in the 1960s.

Kuranda has a number of heritage-listed sites: 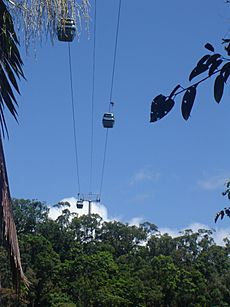 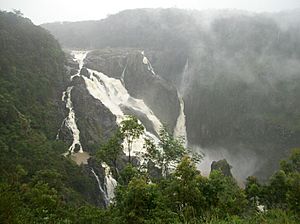 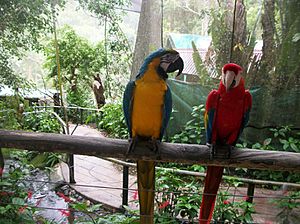 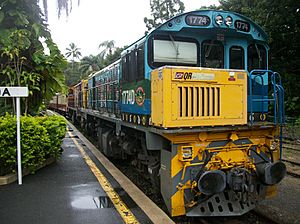 The town receives thousands of tourists each week who arrive from Cairns either on the Kuranda Scenic Railway, the Skyrail Rainforest cableway, coach or by public bus via the Kuranda Range Road, which is a 40-minute drive from Cairns.

The town is surrounded by tropical rainforest which is abundant with wildlife and popular amongst birdwatchers. There are several short walks around the village including the Jum Rum Creek Environmental Park which includes The River Walk. Walking to the Barron Gorge National Park to visit Barron Falls is also popular. Another 1 kilometre (0.62 mi) each way on to Wright's Lookout. There is also a shuttle service that provides an alternative to walking with a half-hourly service out to the Barron Gorge National Park. This service also includes a visit to Wright's Lookout. (Note Sept 2014 - this shuttle bus is no longer running.)

Attractions in Kuranda include a bird aviary, butterfly sanctuary, wildlife rescue/rehabilitation centre, reptile park and koala sanctuary. There is also a fossil and gemstone museum and candy making displays. Cruises are available aboard 'Kuranda Queen' on the Barron River.

Kuranda provides the visitor with many shopping opportunities, all within easy walking distance around the CBD, including the markets which consist of a range of stalls with locally made arts, crafts and produce. Kuranda has numerous art galleries and specialty shops offering a wide selection of locally made and designed art, clothing and handicrafts as well as a variety of sidewalk cafes and restaurants. Kuranda is also a major centre for opals and didgeridoos.

It was also the first home of the Tjapukai Indigenous Dance Theatre, established by former New Yorkers Judy and Don Freeman, together with indigenous dancer and actor, David Hudson. The theatre is now located adjacent the Skyrail Terminal at Smithfield.

The nocturnal frog species Litoria myola is only found in the vicinity of a few creeks near Kuranda.

Being situated in the tropics, Kuranda experiences only mild variations in temperature and its seasons consist of a dry season and a wet season. Kuranda does not seem to have a dedicated weather station and resultant data feed and so comparisons to Cairns are valid. It appears that Phone and Weather apps default to Cairns data, and so can be misleading. Generally Kuranda is 2-5 degrees C cooler than Cairns, it has more rainy days as a result of orographic influences, is more Humid generally (with residential areas in Kuranda village averaging 90% due to surrounding rain-forest) - Kuranda is often referred to the "air conditioned suburb of Cairns" and the Rain-forest and elevation is responsible in part for these perceptions, it is rare that temps exceed 31 deg C in summer, being moderated by rain and cloud cover in January to March (wet season) and night minimums similarly rarely drop below 20 deg C. Winter maximums typically are a consistent 25 deg C however night minimums can drop to 8 deg C owing to clear skies at this time of year (June - August) and cooler air movements originating from the southern Atherton tablelands.

The coolest month is July, and the hottest January.

All content from Kiddle encyclopedia articles (including the article images and facts) can be freely used under Attribution-ShareAlike license, unless stated otherwise. Cite this article:
Kuranda, Queensland Facts for Kids. Kiddle Encyclopedia.