Kids Encyclopedia Facts
Not to be confused with Barron River (Ontario).

The Barron River (Indigenous: Bibhoora) is located on the Atherton Tablelands inland from Cairns in northern Queensland, Australia. With its headwaters below Mount Hypipamee, the 165-kilometre (103 mi)-long river with a catchment area of approximately 2,138 square kilometres (825 sq mi) forms through run off from the Mount Hypipamee National Park, flows through Lake Tinaroo, and eventually empties into the Coral Sea near Smithfield. 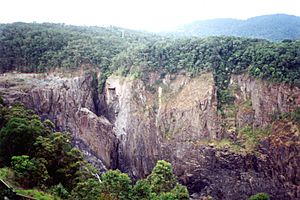 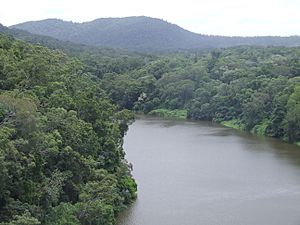 The reservoir of the Barron River behind the hydro-electro dam above the Barron Falls as viewed from a Skyrail gondola heading to Kuranda station.

Over time, some of the Mitchell River's former headwaters were diverted by natural forces into the Barron. These include the Clohesy River and other tributaries that used to flow northwest to the Gulf of Carpentaria. With the extra water now flowing over the 260-metre (850 ft)-high Barron Falls, the steep, narrow Barron Gorge was formed. Much of the water that used to flow over the falls has now been diverted in upstream dams and used to generate electricity at the Barron Gorge Hydroelectric Power Station.

The Barron's headwaters start in the Mount Hypipamee National Park near Mount Hypipamee at an elevation of 1,200 metres (3,900 ft). The river then flows north 65 kilometres (40 mi) across the Atherton Tablelands before finally turning east after Mareeba towards Kuranda. After passing under the Kuranda Range Highway's bridge and through Kuranda proper, it descends down the 260-metre (850 ft)-high Barron Falls and reaches the Cairns floodplains near Smithfield. The Dinner Falls are located along the upper Barron River. 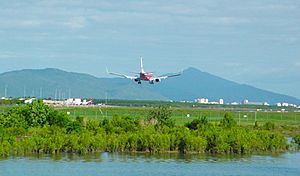 The river's catchment area includes the major tributaries flowing into Lake Tinaroo including Kauri, Mazlin, McLean, Maroobi, Peterson and Severin Creeks. It also absorbs most of the major tributaries on the Atherton Tableland, including Emerald Creek, Granite Creek, the Clohesy River and Stoney Creek. This also includes Thomatis Creek, which has only been connected to the Barron since 1932 and has been responsible for diverting part of the flow from the river. Freshwater Creek joins the Barron River below the Gorge and drains Lake Morris and the Lamb and Whitfield Ranges.

Before entering the Coral Sea, the river's delta splits into three distributaries, the main river channel, Thomatis/Richters Creek and Redden Creek. During times of flooding two other distributaries also operate – Barr Creek and Half Moon Creek.

The river is the sole source of sand for the beaches to the north of Cairns. Sand and gravel extraction from the river bed has supplied growing demand in the Cairns area. In the 1970s and 80s extraction rates reached 90,000 cubic metres (3,200,000 cu ft) per year, which was twice the replenishment rate at the mouth. This has resulted in considerable beach erosion to the north.

The river's original Aboriginal name is Bibhoora. The river gained its current name in 1875 when two police sub-inspectors, Robert Arthur Johnstone and Alexander Douglas-Douglas, named it after Thomas Henry Bowman Barron (circa 1835 – 24 June 1882), chief clerk of police in Brisbane. The European discovery of the river was by James Venture Mulligan in 1874. Barron River gives its name to the electoral district of Barron River, a division of the Queensland Legislative Assembly formed in 1971.

The lower reaches of the Barron River have a well-documented history of flooding dating from early last century. Tinaroo Falls Dams has little effect on the mitigation of floods. Both agricultural and residential areas can be affected. A network of rainfall and river height field stations was established in 1995 to provide a flood warning system for the Cairns City Council.

Heavy rain associated with a cyclone early in 1939 caused substantial flooding on the Barron River and resulted in the river changing its course. The mouth of the Barron moved about 2 kilometres (1.2 mi) north from Casuarina Point on the northern Cairns esplanade to Ellie Point.

Some of the river's worst flooding occurred in 1950. This was due to a major tropical cyclone following the contour of the Queensland coast for over a week.

The stocking of exotic sports fish into the river has led to a serious decline in the diversity and abundance of native fish.

All content from Kiddle encyclopedia articles (including the article images and facts) can be freely used under Attribution-ShareAlike license, unless stated otherwise. Cite this article:
Barron River (Queensland) Facts for Kids. Kiddle Encyclopedia.