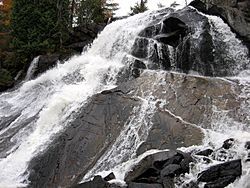 High Falls on the Barron River

The Barron River (French: rivière Barron) is a river in the Saint Lawrence River drainage basin in Nipissing District and Renfrew County, Ontario, Canada. It flows from Clemow Lake in northern Algonquin Provincial Park and joins the Petawawa River, whose southern branch it forms, in the municipality of Laurentian Hills, near the municipality of Petawawa.

The river begins at Clemow Lake in the geographic township of Barron in the Unorganized South Part of Nipissing District, Northeastern Ontario. It flows southeast through Grand Lake where it is crossed by the former Canadian Northern Railway later Canadian National Railway main line, now abandoned, and where the Achray campground, formerly a station on the railway, is located on the north shore. It passes into Stratton Township, takes in the right tributary Carcajou Creek, then flows out over the Grand Lake Dam and again under the railway to enter Stratton Lake. The river turns northeast, passes over High Falls to High Falls Lake, then heads east over Brigham Chute. It takes in the right tributary Mulock Creek, enters Master Township, passes over the Cache Rapids, and reaches the Squirrel Depot picnic area and the Squirrel Rapids. The river heads out of Algonquin Park and Nipissing District into McKay Township, part of the municipality of Laurentian Hills in Renfrew County, Eastern Ontario. At this point the river becomes part of Barron River Provincial Park, a non-operating waterway park, and the north shore is part of CFB Petawawa. The river passes over First Chute and reaches its mouth at Lac du Bois Dur on the Petawawa River, which flows to the Ottawa River, about 2.5 kilometres (1.6 mi) west of the community of Black Bay and just before the border with the municipality of Petawawa. The Petawawa Rivers flows via the Ottawa River to the Saint Lawrence River.

Approximately 10,000 years ago, the river was a main outlet for glacial meltwater in this region. It is believed to have carried for a short time the outflow from the Lake Agassiz. The 100-metre (328 ft) deep Barron Canyon was formed during that time. The rocks exposed in the Canyon are part of the Canadian Shield. The canyon itself still shows activity in the form of rockfalls and landslides.

The Barron River lies inside a fault associated with the Ottawa-Bonnechere Graben.

The river was an important highway during the last part of the 19th century and early 20th century when its water levels were carefully manipulated to facilitate the transport of timber to the Ottawa River and onwards. The Barron Canyon was the scene of noisy log drives every spring. The name the loggers used for the towering cliffs was the "Capes". Moving timber in this way was a dangerous task and evidence can be found by the graves still found on the edge of the Petawawa and Barron Rivers.

A popular canoe route passes through and a hiking trail leads to the edge of the Barron Canyon.

All content from Kiddle encyclopedia articles (including the article images and facts) can be freely used under Attribution-ShareAlike license, unless stated otherwise. Cite this article:
Barron River (Ontario) Facts for Kids. Kiddle Encyclopedia.