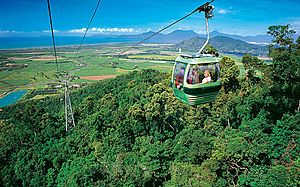 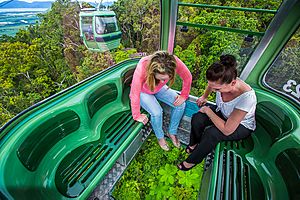 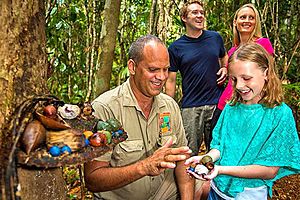 The path of the Skyrail 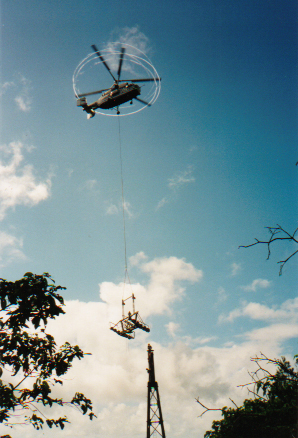 Helicopters were used extensively during construction 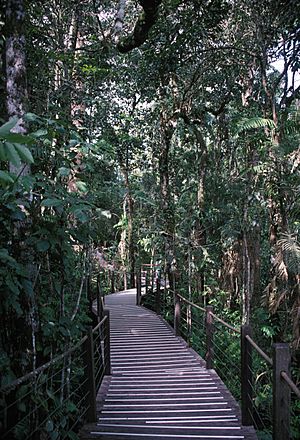 At the Red Peak Station 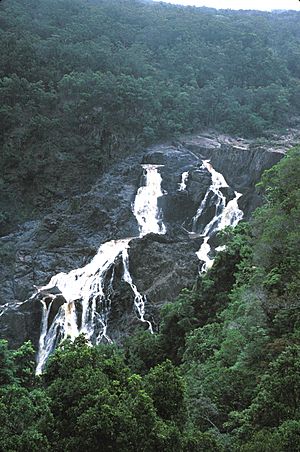 View from the cableway of Barron Falls

Skyrail Rainforest Cableway journeys through the Wet Tropics Rainforest, home to the world's oldest tropical rainforest, older than the Amazon Rainforest. It was the longest gondola cableway in the world when it was completed in 1995.

The cableway, which journeys over the MacAlister Range between Smithfield and Kuranda, includes six-person gondola cabins that glide metres above the treetops. A one-way trip takes about 1.5 hours, and a return trip is about 2.5 hours. Two rainforest stations, Red Peak (16°50′57″S 145°40′10″E﻿ / ﻿16.8493°S 145.6695°E﻿ / -16.8493; 145.6695﻿ (Red Peak station)) and Barron Falls (16°50′01″S 145°38′44″E﻿ / ﻿16.8335°S 145.6455°E﻿ / -16.8335; 145.6455﻿ (Barron Falls station)), allow exploration of the forest floor on boardwalks and education of the World Heritage area. Complimentary ranger guided tours are available at Red Peak. An interpretative display the 'Rainforest Discovery Zone' is located at Red Peak. A Rainforest Interpretation Centre, developed in conjunction with the Commonwealth Scientific and Industrial Research Organisation (CSIRO), is located at the Barron Falls. The Edge Lookout, open to the public since March 2019, is located at Barron Falls. The lookout reaches out 160 metres (520 ft) above Barron Gorge floor, with views across the Gorge and Barron Falls. The lookout also incorporates a glass floor section.

It was the only Australian finalist in the 2014 International Tourism for Tomorrow Award. In 2012, it was the first tourism attraction in the world to receive Platinum EarthCheck Accreditation. It won the 2000 British Airways Tourism for Tomorrow International Environment Award, the 1996 EIBTM European Greening of Business Tourism Most Environmentally Conscious Visitor Attraction Award and the 2008 and 2009 Qantas National Award for Excellence in Sustainable Tourism. In 2000, it was inducted into the Queensland Qantas Award's Hall of Fame for Best Tourism Attraction and in 2010 for Excellence in Sustainable Tourism.

The Skyrail concept was put forward in 1987, with construction beginning in June 1994. Pre-construction included consultation with and approval from 23 local, state and federal government agencies and local communities along with numerous assessments including an Environmental Impact Study. It also established an agreement with the Djabugay Tribal Aboriginal Corporation for the protection of Aboriginal cultural heritage. Skyrail is owned and operated by the Chapman Group, led by George Chapman, AO, who was named one of Queensland Government's 2011 Queensland Greats. His son, Dr Ken Chapman, is Skyrail's managing director and daughter, Karen Hawkins, is a director. The AU$35 million cableway opened to the public on 31 August 1995 with 47 gondolas. A AU$2.5 million upgrade in May 1997 increased the number of gondolas to 114, enabling it to carry over 600 passengers an hour in each direction. In 2006, it underwent an AU$2.5 million upgrade which included a replacement café, expanded ticketing services and a larger retail store. In November 2013, it introduced 11 Diamond View glass floor gondolas, and in April 2014, the Canopy Glider, a ranger-escorted, open-air gondola, was added. Special guests at Skyrail include Queen Elizabeth II and Prince Philip on March 2002, former Australian politician Julia Gillard in 2004, and Australian tennis player Pat Rafter in 2013.

Before construction, the site was surveyed to make sure endangered and rare species would not be affected. The top soil and leaf litter were collected and reintroduced when construction was complete. Plant seedlings removed during construction were replanted in their original locations. Construction began in June 1994 despite protests from conservationists.

The 32 towers at Skyrail were built in 10×10 m clearings, and workers had to sterilise equipment and footwear before entering sites. Russian Kamov helicopters were used extensively to carry equipment, materials and cement to tower sites and rainforest stations. Helicopters carried 900 tonnes of steel, cement and building materials into the Barron Falls Station alone. Because no roads were built during construction, workers walked to the tower sites each day with their equipment.

The Skyrail Rainforest Foundation was established in 2005 to raise and distribute funding for tropical rainforest research and education projects. These include scientific studies of rare and endangered rainforest fauna and flora, canopy ecology and of rainforest species for medical research. The foundation offers funding for students and educators to research into rainforest protection. Since its inception from April 2014, the foundation has provided AU$302,000 towards research projects. 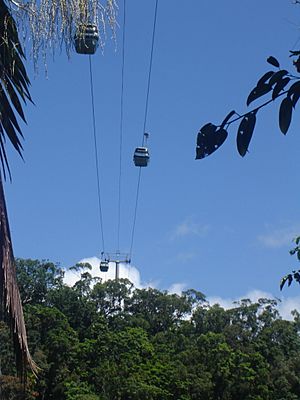 In 2009 as part of the Q150 celebrations, the Skyrail Rainforest Cable was announced as one of the Q150 Icons of Queensland for its role as a "structure and engineering feat".

All content from Kiddle encyclopedia articles (including the article images and facts) can be freely used under Attribution-ShareAlike license, unless stated otherwise. Cite this article:
Skyrail Rainforest Cableway Facts for Kids. Kiddle Encyclopedia.