Kowanyama is a town on the Gulf of Carpentaria side of Cape York Peninsula in Far North Queensland, Australia.

The aboriginal people who live in this community include Kokominjena, Kokoberra and Kunjen groups, amongst others. In their overarching Yir-Yoront language, Kowanyama means "The place of many waters."

The community is situated on the banks of the Magnificent Creek, a tributary of the Mitchell River, 20 kilometres (12 mi) inland from the coastline of the Gulf of Carpentaria.

Kowanyama is accessed by an all-weather airstrip, as well as unsealed roads in the dry season from Pormpuraaw to the north, Normanton to the south and Cairns to the east.

In 1905, Trubanamen Mission was established inland on Topsy Creek, now known as the old mission. Aboriginal peoples of the region were gradually drawn from their ancestral lands into the mission settlement. 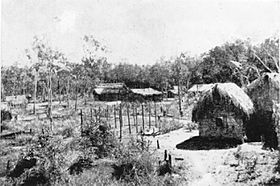 Photo of Kowanyama near its beginnings, taken June 1919

Later, in 1916, Mitchell River Mission was founded on the present site of Kowanyama and the Trubanamen site abandoned. Some peoples continued to occupy their traditional lands, moving into Kowanyama as late as the 1940s.

More than 1000 people now live in Kowanyama, making it one of the largest communities on the Cape York Peninsula. Kowanyama's Aboriginal people continue to identify strongly with their ancestral countries and with the languages, stories, songs, dances, and histories associated with those countries. Language groups associated with countries in the Kowanyama region are Yir Yoront, Yirrk Thangalkl, Koko Bera, Uw Oykangand, and Olkola.

In 1964, a cyclone destroyed the mission. The Queensland government funded the rebuilding.

In 1967 the Anglican church were no longer able to sustain their activities in the area as a Church Mission. The Department of Aboriginal and Islander Affairs, a government department, under the Act continued running the affairs of the community.

In July 1987, the State Government of Queensland implemented legislation for a DOGIT over the lands in the Mitchell River delta, an area of 250 km². The deed covered the traditional lands of the people of Kowanyama. Like other DOGIT communities of the time, Kowanyama had a town Council elected by Aboriginal people living in the community. The newly formed Kowanyama Council assumed responsibility for implementing certain conditions of the DOGIT. Seven elected aboriginal residents hold three-year terms in office.

Other homelands, including the Oriners Pastoral Lease and the Sefton Pastoral Lease, were independently purchased by the Kowanyama Council and are located outside the DOGIT boundary.

A Community Justice Group operates within Kowanyama. This group is made up of respected members in the community. They meet to discuss issues within the town and make recommendations to Council.

The community also has a Council of Elders, who are consulted by the Kowanyama Council when making community decisions. The elders operate in conjunction with the Lands Office.

The Kowanyama Aboriginal Land and Natural Resources Management Office (KALNRMO) works to promote and facilitate aboriginal management of the natural and cultural resources of Kowanyama country by the people of Kowanyama. Through community consultation and direction, KALNRMO has developed a community development agenda for the Kowanyama region, including:

Through the initiatives of KALNRMO, the Kowanyama community is widely regarded as a leader in indigenous land management issues. Since 1987, Kowanyama has effected substantial local control over fishing in the Mitchell River Delta, including the closure of some waters to non-Aboriginal fishing under state fisheries legislation. This action, funded through the enterprise income of the Kowanyama Aboriginal Council, has provided Aboriginal people access to the River’s fish stocks for their cultural and economic needs. In this way, Aboriginal people can fish and hunt as they have done for many thousands of years.

KALNRMO employs a senior ranger and four field rangers. The Kowanyama Rangers implement land management strategies in many areas of the DOGIT, and, in addition to tourism and visitor management, patrol closed and open waters. The Rangers also observe fisheries regulations, especially for illegal commercial or recreational fishing in closed waters. Beginning in 2007, the Rangers monitor threatened turtle populations and participate in the Carpentaria Ghost Nets Programme to remove debris (primarily fishing nets) discarded into the Gulf of Carpentaria by commercial fishermen from Australia and Indonesia.

Kowanyama experiences a tropical savanna climate (Köppen climate classification Aw). Daytime temperatures generally stay above 30 °C (86 °F) all year round and reach up to 35 °C (95 °F) in the pre-wet season period in October and November. The wet season runs from December to April and is characterized by frequent torrential downpours and high humidity. During the dry season, almost no rain falls and days are warm to hot but humidity is low and the nights can get quite cool.

Kowanyama is serviced weekly in the dry season by road trains from Cairns. The service becomes more frequent as the wet season approaches.

Early storms in October can make the 400-kilometre (250 mi) dirt road to Chillagoe east of the community subject to flooding. By late December the storms of the monsoons have usually arrived, isolating the community by road.

The monsoons are regarded as the arrival of nhawrr yirrpa, the Rainbow Snake who brings the life giving water to the land. During the wet season, which may last until May, the community is serviced only by aircraft, as all other access is restricted. During the wet season, fresh foods and perishables are flown into the community each week on charter planes by stores in town. Airline passenger services to Cairns, 600 kilometres (370 mi) away is maintained throughout the year through Kowanyama Airport.

All content from Kiddle encyclopedia articles (including the article images and facts) can be freely used under Attribution-ShareAlike license, unless stated otherwise. Cite this article:
Kowanyama, Queensland Facts for Kids. Kiddle Encyclopedia.