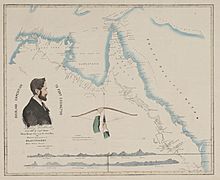 Friedrich Wilhelm Ludwig Leichardt (1813—1848) was a German naturalist and explorer who explored the north of Australia. In 1844 Leichhardt led a small group from Moreton Bay in the south east corner of Queensland west to Port Essington in the Northern Territory. This was a trip of 4,828 km. They returned to Sydney by boat. He was presented with the Patrons Gold Medal by the Royal Geographical Society in London.

In 1848 he set out to cross the continent from east to west. He believed he could go north around the deserts to the coast of Western Australia, and then follow the coast south to the Swan River. After leaving the Darling Downs, Leichhardt's group disappeared. Many people searched, and there were stories about marked trees, or found items, but nothing was proved.

In 2006 a small piece of brass with Leichhardt's name on it proved to be a genuine item from the explorer. It had been found in 1900 by an Aboriginal stockman in Western Australia, close to the Northern Territory border, in the area between the Great Sandy Desert and the Tanami Desert.

All content from Kiddle encyclopedia articles (including the article images and facts) can be freely used under Attribution-ShareAlike license, unless stated otherwise. Cite this article:
Ludwig Leichhardt Facts for Kids. Kiddle Encyclopedia.