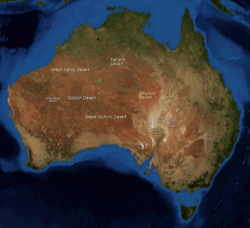 Location of deserts in Australia 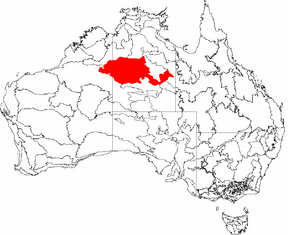 The IBRA regions, with Tanami in red

The Tanami Desert is a desert in the Northern Territory of Australia. It is rocky with small hills, an arid and isolated area that was not fully explored until well into the twentieth century. It is crossed by the Tanami Track. The explorer John McDouall Stuart made repeated attempts to cross the desert in the 1860's while trying to reach the Victoria River. He was unable to find water.

Under the name Tanami, it is one of the Interim Biogeographic Regionalisation for Australia (IBRA) regions. The desert is uniquely "one of the most important biological areas to be found in Australia particularly as it provides refuge for several of Australia's rare and endangered species."

The species that are found include:

The Tanami Desert is home to the Kukatja and Walpiri people. The Tjurabalan live at the edge of the desert.

All content from Kiddle encyclopedia articles (including the article images and facts) can be freely used under Attribution-ShareAlike license, unless stated otherwise. Cite this article:
Tanami Desert Facts for Kids. Kiddle Encyclopedia.