The Flinders River is the longest river in Queensland, Australia, at approximately 1,004 kilometres (624 mi). It was named in honour of the explorer Matthew Flinders. The catchment is sparsely populated and mostly undeveloped. The Flinders rises on the western slopes of the Great Dividing Range in North West Queensland and flows generally north-west through the Gulf Country, across a large, flat clay pan, before entering the Gulf of Carpentaria.

The River rises in the Burra Range, part of the Great Dividing Range, 110 kilometres (68 mi) north-east of Hughenden and flows in a westerly direction past Hughenden, Richmond and Julia Creek, then north-west to the Gulf of Carpentaria 25 km (16 mi) west of Karumba. The catchment is bordered to the south by the Selwyn Range.

A total of 36 tributaries flow into the Flinders, the principal ones being the Cloncurry, Saxby and the Corella rivers. Another major tributary is Porcupine Creek, which has carved out a dramatic gorge located in the Porcupine Gorge National Park. There are two dams on the river - the Flinders River Dam and Corella Dam. Other smaller tributaries include: Range Creek, Morepork Creek, Oxley Creek, Canterbury Creek, Dutton River, Back Valley Creek, L-Tree Creek, Gorman Creek, Hazlewood Creek, Nonda Creek, Eurimpy Creek, Yambore Creek, Bynoe River and Armstrong Creek. The river flows through one permanent waterhole, Flagstone waterhole.

Several towns are located within the catchment including: McKinlay, Burke and Wills Junction, Hughenden, Richmond, Julia Creek and Cloncurry.

The riverbed is composed of silt with clay and sand, sand and gravel, and gravel with cobble. A large, flat clay pan is located in the area where the Flinders, Gregory and Leichhardt Rivers enter the Gulf. The mouth of the river lies in the Gulf Plains Important Bird Area.

Vegetation along the river in the upper catchment includes riparian woodlands composed of paperbarks including; Melaleuca argentea, Melaleuca bracteata and Melaleuca fluviatilis and sub-dominant eucalypts including River Red Gum, Coolabah, with minor Bauhinia. Other species found include the wattle. Infestations of weeds such as Prickly acacia, Noogoora burr, Rubber vine and Chonky apple are also found. The understorey is dominated by a closed cover of riparian grasses including native couch on the sandy loams adjacent the stream channels. 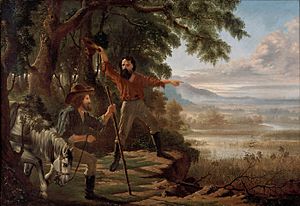 Wanamarra (also known as Maykulan and Wunumura) is an Australian Aboriginal language in North West Queensland. The language region includes areas within the Shire of McKinlay, Shire of Cloncurry and Shire of Richmond, including the Flinders River area, and the towns of Kynuna and Richmond.

The Flinders River was named in 1841 by Captain Wickham and Lieutenant John Lort Stokes of HMS Beagle, in honour of the explorer Matthew Flinders. Stokes charted and surveyed the estuary of the Flinders and Albert rivers, and named many other features in the area, including Disaster Inlet, Morning Inlet and the Van Diemen River.

Robert O'Hara Burke, William John Wills and Charles Gray reached the river delta in 1861, completing the goal of their expedition to cross the continent from south to north. Gray died on the journey back to Cooper Creek, and both Burke and Wills died after reaching the creek to find their depot abandoned.

The first pastoralist to stock country along the Flinders was James Gibson who established Prairie Station in 1861. In 1864 more cattle stations were established by Gibson including Millungera and Taldora Stations.

In 2003, licences to take water from the river were first released when a pastoralist, Corbett Tritton, applied for an irrigation licence. He successfully grew crops like sorghum and cotton on his cattle station and soon other graziers were interested. A moratorium on the issuing of licences followed, but was lifted in 2013.

Heavy rainfall in Queensland in early 2019 resulted in major flooding along the Flinders, considered the worst in half a century. The broad flood plain has allowed the Flinders to stretch as wide as 60 km. The rising water also caused devastation to farmers with heavy losses to cattle herds.

All content from Kiddle encyclopedia articles (including the article images and facts) can be freely used under Attribution-ShareAlike license, unless stated otherwise. Cite this article:
Flinders River Facts for Kids. Kiddle Encyclopedia.