Cooper Creek (formerly Cooper's Creek) (28°23′S 137°41′E﻿ / ﻿28.383°S 137.683°E﻿ / -28.383; 137.683) is one of the most famous rivers in Australia. It is sometimes called the Barcoo River after one of its tributaries. It is one of three major Queensland river systems that flow into Lake Eyre. The water flow in Cooper Creek comes from monsoonal rains falling months earlier and many hundreds of kilometres away in eastern Queensland. At 1,300 kilometres (810 mi) in length it is the second longest inland river system in Australia after the Murray-Darling system. 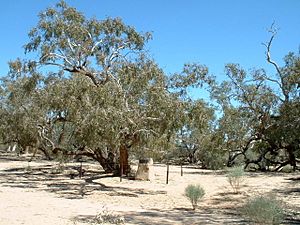 Charles Sturt named the river in 1845 after Charles Cooper, the Chief Justice of South Australia. The explorers Burke and Wills died from starvation in 1861 on the banks of Cooper Creek. John King survived the expedition with help from the Aborigines. Only ten years after the explorers' deaths, homesteads were being built along the creek. A station (farm) at Innamincka was the first permanent settlement in the area.

By 1880 the reliable water source had attracted many settlers. The whole area was taken up and stocked with cattle. This pushed the local Aborigines from their traditional lands. By 1900 their population was just 30, only 10% of the original number, as influenza and measles took their toll.

The creek starts west of the Great Dividing Range as two rivers, the Thomson from near Longreach and Charters Towers, and the Barcoo in the area around Barcaldine, about 500 kilometres (310 mi) inland from Rockhampton.

Cooper Creek spreads out into a vast area of channels, making its way south into the far south-west corner of Queensland before turning west into South Australia towards Lake Eyre. In most years, the water soaks into the earth, fills channels and waterholes, or simply evaporates without reaching Lake Eyre. In very wet years, however, it can flood the entire Channel Country and reach Lake Eyre after flowing through the Strzelecki Desert, Sturt Stony Desert and the Tirari Desert. Although the Cooper carries much more water than the Diamantina and the Georgina, it does not flow into Lake Eyre as often as those rivers. One reason is that much more water is lost than with the Diamantina or Georgina. During a flood Cooper Creek may be as wide as 40 kilometres (25 mi).

Most of the land around the Cooper is used for sheep and cattle grazing on natural grasslands. The rainfall is not reliable enough to grow crops. The soils are quite fertile, though generally heavy in texture and often crack when they dry out.

All content from Kiddle encyclopedia articles (including the article images and facts) can be freely used under Attribution-ShareAlike license, unless stated otherwise. Cite this article:
Cooper Creek Facts for Kids. Kiddle Encyclopedia.