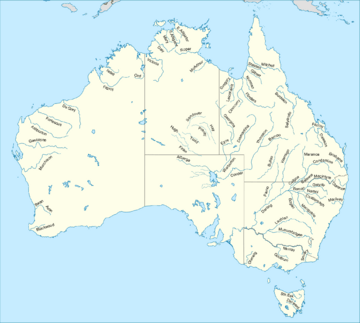 This is a list of rivers of Australia. Rivers are ordered alphabetically, by state. The same river may be found in more than one state as many rivers cross state borders. 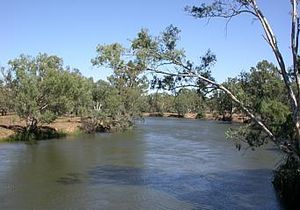 A branch of the Murray River, near Howlong, New South Wales.

Longest river by state or territory

Rivers by state or territory

The Geographical Names Board of New South Wales lists 439 rivers in the Geographical Names Register. In the following list, where there are duplicated names, the source local government area (LGA) is identified. In the event of there being two rivers of the same name within the same local government area, additional referencing is provided. Rivers of New South Wales lists all rivers below, grouped according to whether the river flows towards the coast or flow inland, and grouped according to their respective catchment and sub-catchment.

All content from Kiddle encyclopedia articles (including the article images and facts) can be freely used under Attribution-ShareAlike license, unless stated otherwise. Cite this article:
List of rivers of Australia Facts for Kids. Kiddle Encyclopedia.